The Miami Marlins’ firesale may not be over. It may be just beginning.

The Fish have already reportedly agreed to ship a host of players including Jose Reyes, Josh Johnson and Mark Buehrle to Toronto in the club’s latest attempt to ditch payroll. They’re looking to trade away every other piece of their major league roster, apparently, at least roster members not named Giancarlo Stanton or Billy the Marlin.

The next name on the chopping, er trading block is Logan Morrison. According to Joe Capozzi of the Palm Beach Post, the Marlins are now shopping the young player, as well as pitcher Ricky Nolasco.

It will be interesting to see what kind of market there is for Morrison, but the Red Sox are one team that may want to get in on the LoMo action.

The Sox are still on the lookout for help at first base and corner outfield. So it only makes sense that they would value a player like Morrison who can play both positions. While Morrison has played a lot of outfield since reaching the majors, there are some who think his career will start escalating toward the next level upon moving to first base on a more permanent basis.

This, from ESPN’s Buster Olney.

Rival execs believe that Logan Morrison will be in a much better position for success once he returns to 1B, his primary position in minors.

However, Morrison is coming off of a forgettable 2011 season marred by inconsistency and injury. The 25-year-old hit just .230 with 11 home runs and 36 RBIs in 93 games. That went along with a .707 OPS. With those types of numbers, even with Morrison under team control through 2016, you’d be hard-pressed to give up much of anything to acquire him.

He has shown, though, that he can produce at the major league level. Just a year before, Morrison hit .247 with 23 home runs, 72 RBIs and a .798 OPS. He showed the ability to hit the ball to the gaps with 25 doubles as well. That type of power is something that Morrison has displayed at virtually every level of pro ball, a rarity for a young player.

Morrison’s strong bat, which may only flourish in Fenway Park, is something the Sox could use as well. Morrison has shown, when he’s healthy and going well, that he’ll hit to all fields.

Now, is the 2010 season more of an aberration than anything else, especially in the wake of Morrison’s 2011 season? Maybe, maybe not. The true answer may lie somewhere in the middle. However, if the Red Sox think they might be able to get 20 home runs and maybe 75 RBIs out of Morrison at the first base position, you have to figure that they would at least explore the option.

In a very, very limited sample size, Morrison has already proved he likes Fenway Park. He tore up the Red Sox when the Marlins came in for a June series this past summer, going 4-for-11 with two home runs and six RBIs. Again, it’s a small sample size, but the numbers would indicate that Morrison can hit at Fenway. If you don’t believe the numbers, ask the player himself.

“It’s amazing. The fans are great,” Morrison said of Fenway Park during that sweltering series in June. “I think it’s definitely cozy. You get that ‘the fans are on top of you’ feeling. I like it. It’s cool, it’s good.It’s a great park. Boston should be proud.”

Away from the field, Morrison has been criticized at times in the past for his behavior away from the field. He has a very high-profile social media presence with more than 124,000 Twitter followers to his name. Some say that he tweets too much, and that he uses Twitter in the wrong ways.

That may be true to an extent, but at the same time, he’s a 25-year-old kid. He’s going to continue to mature, and maybe a new organization is just what he needs. After all, there’s no player with major league talent who deserves the punishment of playing in that Marlins organization, not anymore at least.

For all of the criticisms of Morrison’s attitude, makeup and any other sort of intangibles, he has shown the ability and willingness to mature into a player that could be a leader someday. It was Morrison who reportedly challenged Hanley Ramirez in 2011 after the shortstop continuously showed up late. For a Red Sox team looking to reestablish its core coming off of a couple of embarrassing seasons, Morrison might be the type of player you look to build a core with.

It’s too early to tell if Morrison will even be moved, let alone to Boston. But there are reasons to believe it could work. The position fits. The player seems to fit. And the money fits. The Red Sox are looking to fill some pretty substantial holes this offseason, and picking off the Miami scrap heap may be a fine place to make a real impact. 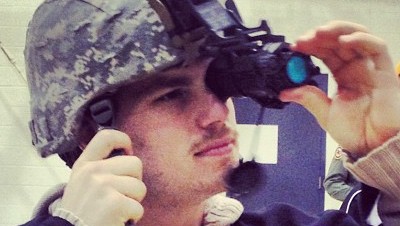