Rajon Rondo 'Initiated Everything' During Celtics-Nets Rumble, According to Game's Crew Chief - NESN.com Skip to content

There are two sides to every story, but the way James Capers sees it, Rajon Rondo was the man most responsible for Wednesday’s brawl between the Celtics and Nets.

Capers, who served as the crew chief of the three officials who oversaw Wednesday’s game at TD Garden, told a pool reporter following the contest that Rondo “initiated everything that proceeded after the foul.”

The foul in question occurred toward the end of the second quarter, when Nets big man Kris Humphries made contact with Kevin Garnett as The Big Ticket went up for a shot. Garnett tumbled to the ground, which immediately caught the attention of an enraged Rondo.

Rondo shoved Humphries near the base line, at which point the two started going at it. Teammates soon jumped in, and the melee resulted in Rondo, Humphries and Gerald Wallace getting ejected — fighting, according to Capers, is an automatic ejection in the NBA.

“When Kevin goes to the basket, he is rerouted by Humphries. So we had a personal foul for the reroute,” Capers explained. “Kevin is trying to continue — to get a continuation by shooting — and now Humphries hits him. Because the whistle blew, it was a dead-ball situation, and that’s a technical foul for contact during a dead ball … What proceeds after that is a fight, so he’s ejected.”

Capers also said that upon review neither Garnett nor Wallace threw a punch, although they “aggressively went to one another.” 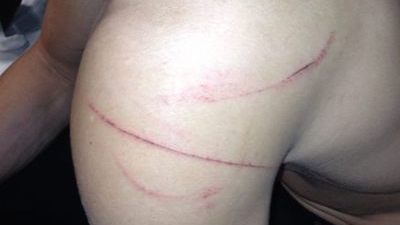 Kris Humphries Shows Off Battle Wounds After Celtics-Nets Brawl, Wonders Where He Can Get Tetanus Shot (Photo)