Reggie Bush might not have been on the field much during the Dolphins’ 37-3 blowout loss to the Titans after coughing up a costly first half fumble. But he figures to be featured in the offense once again this week as Miami heads to Buffalo for a quick turnaround on Thursday night.

During an appearance on the Paul and Young Ron Show in Miami on Wednesday morning, Bush admitted that while he understands the benching, the decision does still bother him. While talking a bit during the show about his own performance and problems, Bush also looked ahead to the showdown with the Bills. But it wasn’t exactly what you would expect.

During the interview, one of the hosts suggested that the crowd in Buffalo might get a little bit rowdy on Thursday, even joking that some of the women in the crowd might be topless. The other host directed his comment at Bush, saying, “You don’t wanna see that.”

While Bush would’ve been wise to just laugh off the comment or change the subject, he instead gave in and played along with the ruse, laughing and saying, “not Buffalo women.”

The comment didn’t seem malicious and was likely more of a joke between the tailback and the hosts, but that’s also the sort of remark that can incite a fanbase, especially in Buffalo. So, you may want to tread lightly there, Reggie. Just ask Tom Brady. 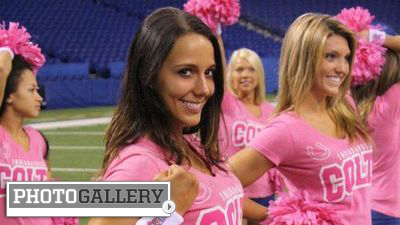 Colts Cheerleader Says She Will Shave Head If Mascot Can Raise $10,000 (Photos)