Vote: How Many Yards Will Andrew Luck Throw for Sunday Against the Patriots? - NESN.com Skip to content With the Indianapolis Colts coming to town Sunday, the Patriots’ biggest test will be trying to limit the impact of impressive rookie quarterback Andrew Luck.

The No. 1 overall pick has thrown for 2,631 yards in nine games this season, with 10 touchdowns and nine interceptions, while completing 57.5 percent of his passes. Luck has thrown for more than 300 yards in four games this season, and he threw for 433 just two weeks ago against the Dolphins. Luck is coming off a 227-yard performance in Week 10 against the Jaguars on Thursday night.

The Patriots’s defense is giving up 285 passing yards per game — fourth worst in the NFL. It has allowed 300-plus passing yards in five games this season, and 200-plus in eight games. The only quarterback the defense held to less than 200 passing yards was Kevin Kolb in New England’s Week 2 loss to the Arizona Cardinals.

The Patriots have added an extra piece to their secondary this week, and they’ve been getting some healthy bodies back as well. Cornerback Aqib Talib will make his Patriots debut Sunday after a Nov. 1 trade with the Buccaneers. Talib served out the last game of a four-game suspension last week against the Bills. The team also got safety Steve Gregory back on Sunday and could see Patrick Chung return from injury this week.

The Patriots have historically done a pretty good job at stopping Colts star receiver Reggie Wayne. He has 734 yards on 55 catches and five touchdowns in 10 career games against New England. The veteran wide receiver leads the league with 69 catches this season. He has 931 yards and three touchdowns.

One of the Patriots’ biggest problems this season has been allowing big plays. Luck has attempted 55 passes over 20 yards, good for first in the league. The rookie is 10th in the NFL in deep passing accuracy — he is completing 47.3 percent of passes that travel more than 20 yards.

Without much of a running game — and going against a stout Patriots’ rushing defense — the Colts may be forced to throw early and often if they hope to keep up with Tom Brady and the fast-paced New England offense.

So how many yards do you think Luck will throw for Sunday afternoon? 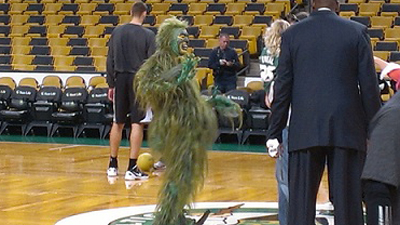 Dr. Seuss’ ‘The Grinch’ — Or Something Like It — Makes Visit to Parquet Floor at TD Garden Prior to Celtics Game (Photo)