NHL players have spent the lockout in a variety of way from heading overseas to play to trying their hands at things like, say, directing the Boston Pops.

However, one player has everyone beat. Naturally, that player is Philadelphia Flyers goalie Ilya Bryzgalov.

The Philly netminder is keeping his game sharp in Russia during the lockout, but he’s not limiting himself to hanging out between the pipes.

Bryzgalov, who might be from another planet to begin with, is trying his hand as an astronaut, sort of.

Yahoo’s Puck Daddy blog brings us the incredibly awesome story of Bryzgalov’s cameo as a cosmonaut. The goalie made a stop at the Yuri Gagarin Cosmonaut Training Center in Russia, where he tried on spacesuit, while also getting a little bit of a crash course on what astronauts go through. Bryzgalov, who is used to wearing a ton of equipment while on the clock, looked more like an astronaut on ice trying to maneuver in the suit.

Bryzgalov’s interest in space has been well-documented, and he’s a guy who tends to have some pretty deep thoughts from time to time. He made that hilariously evident with this unforgettable soliloquy when the Flyers were featured on HBO’s 24/7: Road to The Winter Classic last season.

Luckily, there’s video, albeit in Russian. Check it out below at the 4:00 mark.

Report: NHLPA to Vote on Possible Disclaimer of Interest Authorization for Executive Board 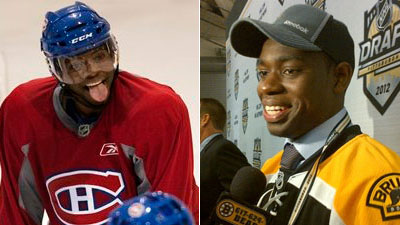 P.K. Subban Thinks Bruins Fans ‘Have to Get Over It Now’ After B’s Drafted Brother Malcolm