Hopefully Metta World Peace didn’t take this one too hard.

The Lakers went on a team outing to a movie theater Thursday, watching Lincoln together before Friday night’s big showdown with the Oklahoma City Thunder.

But, while Abraham Lincoln may be one of America’s most well-known presidents, there’s good reason to think that maybe some of the Lakers’ players should have been given a primer before the team settled in to watch. This is the team that includes World Peace, after all — the very player who was quite disappointed when he tried to bring history and hockey together and learned that George Washington had nothing to do with the Stanley Cup.

That fear seemed to be proven correct after Kobe Bryant was asked Friday how his teammates responded to the film.

Bryant was apparently joking, however.

That doesn’t mean that the Lakers were giving Lincoln his due, however — apparently, the Canadian citizen among the bunch used the team field trip to catch up on some sleep.

One can guess that the reason the Lakers saw Lincoln was because of the deeper lessons the past president provides on bridging gaps and bringing disparate sides together for a common goal. But, then again, that’s a pretty deep lesson if guys don’t know who Lincoln is to start with.

Wow — this guy appears to be excited to be on the Cubs. “When I hit that fan, I definitely enjoyed it — until that fine came down. That $3 million I lost killed me. It brought me back to reality because I could have lost my job. It was wild because it had never been done before. And it will never happen again so, yeah, adrenaline was flowing. How many people can say that they’ve punched a fan?”
— Stephen Jackson, on the Malice in the Palace incident between the Pacers and Pistons from November 2004

Let’s see how this story develops.

Patrick Kane apologizes for the lockout — but not for the lid he’s wearing. 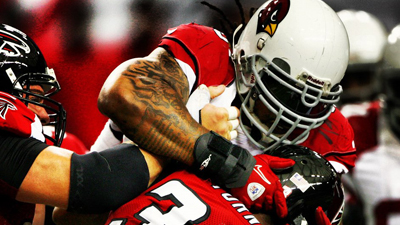