NHL players and fans have spent the last few months wondering whether hockey would ever come back.

On Sunday morning, after several instances of coming close to a deal only to see it slip away, the NHL and players’ association finally reached a tentative agreement that both sides could get behind. While the final details are still being worked out, the agreement was strong enough for celebration to start.

The Bruins’ Andrew Ference was one of the first to signal that a deal had been made, tweeting a simple thumbs up in the early-morning hours (5:02 a.m. ET).

He clarified just a few minutes later that a deal had indeed happened.

From there, it was all fun and games, although Ference did pause for a moment to thank fans for their patience and apologize for the delay.

Ference wasn’t the only one excited to see hockey back, of course, and as fans continue to wake up to the good news, there’s sure to be more thumbs up all around.

That is Caden Crisp, Coco‘s son, with some hair that we think his father should bring back to MLB as soon as possible.

“It’s one step. We know what it means, and we have bigger goals than that.”
— J.J. Watt, on Houston’s victory, with the Texans now heading for a rematch with the Patriots

Now, we would get more excited about this Rocco Grimaldi guy, but have you heard that the NHL is back? 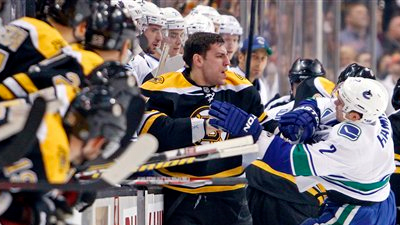 Zoltan Mesko, Andy Brickley Among Those Excited to See Return of Bruins, NHL