Aqib Talib Needs to Be Treated With Caution by Patriots, But He Is Best Option to Fill Void in Secondary - NESN.com Skip to content FOXBORO, Mass. — If the AFC Championship Game was Aqib Talib‘s final appearance with the Patriots, his last play would be a fitting view into his short stint in New England — effective yet injury filled.

Near the end of the first quarter in the championship game, Talib flew across the middle of the field and swatted a potential third-down conversion out of Ravens receiver Torrey Smith‘s hands. But as he made the play, the Patriots’ midseason acquisition came up limp and hobbled off to the sideline holding his left thigh. He wouldn’t return, and the Patriots’ defense faltered without him on their way to a crushing loss.

The defensive struggles in his absence are proof of just how valuable an asset he is, and why his future in New England will be a top priority for the team this offseason. But the Patriots may be wise to proceed with caution.

Bill Belichick remained silent on any contract talk during his end-of-season news conference on Monday, but he did offer high praise for Talib when the subject arose.

Similarly, Talib was mum on any future talk, but expressed his utmost admiration for the organization, just another sign that both sides are interested in possibly extending this relationship.

While inking Talib for his talent seems like a no-brainer, Belichick and his staff might want to at least heed caution before giving him the keys to the bank vault.

Talib made a noticeable difference during his near-three-month stint in New England, that’s not debatable. Before acquiring Talib at the trade deadline, the Patriots’ defense was in trouble. The secondary ranked dead last against the pass, and the pass rush was generating limited pressure on the quarterback. Talib’s addition saw opposing quarterbacks produce an average of 30 less yards through the air and allowed the Patriots to blitz much more up front. The outcome fell short of 2011 as a return trip to the Super Bowl didn’t quite pan out, but the Talib experiment was a huge success.

But his checkered past does raise concerns.

His unacceptable behavior, including two arrests, one suspension and multiple other incidents over the course of five NFL seasons, saw the Tampa Bay Buccaneers ship him to New England for less than face value — a fourth-round pick — earlier this season. But once he entered the confines of Gillette Stadium and adapted to Belichick’s strict code of conduct, Talib was nothing short of a choir boy.

There wasn’t one incident, any signs of struggle or even a hint of discontent. The relationship started strong, remained a healthy one and both parties seemed to benefit.

His track record in New England is impressive but it can’t be too heavily relied upon, as it came in such a small sample size. The improved attitude does show significant progress and indicates a more mature Talib overall, but can he uphold that behavior away from that environment during the offseason?

The other big knock on Talib is his continual health issues, which the Patriots experienced firsthand this season. Talib, who has never played a full 16-game slate, suffered two separate injuries while with the Patriots — a hamstring and thigh injury — forcing him into a limited role against the Jaguars, to miss the season finale against the Dolphins and to, of course, leave the AFC title game.

So, between the injury history and his lengthy rap sheet, Talib is something of a buyer beware.

His teammates are buying into his future with the Patriots, as he was always an active participant in locker room discussion and seemed to gel well with the defensive group. Kyle Arrington confirmed that notion on Monday, explaining just how much they all enjoyed his presence.

“Definitely,” Arrington said when asked if he thought Talib was a good fit in New England. “We’re a fun group. He fit right in. Perfect fit.”

The Patriots are in desperate need of some secondary depth this offseason — Alfonzo Dennard, Ras-I Dowling and Malcolm Williams are the only cornerbacks under contract for next season — and primary on that list should be a shutdown cornerback. Talib was the perfect fit for that role in 2012, and he seems like a promising candidate heading into the future as well.

The free-agent cornerback market looks to be fully stocked with talent this offseason — Brent Grimes (Falcons), Cary Williams (Ravens) and Sean Smith (Dolphins) are available, just to name a few — but Talib still appears to be the best fit in New England. The Patriots need to be careful, though.

Talib is an extreme risk-reward case, and Belichick really needs to weigh out some of the inherent risks involved — if he hasn’t already — and take some time before jumping to a conclusion. The relationship proved to be a good fit for nine weeks this season, but now they’ve got to decide if it can continue that way for four to five more. 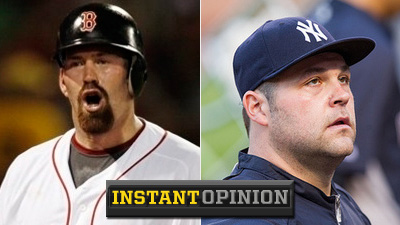