Jarvis Jones Drops From No. 1 Pick in NFL Mock Draft 3.0 Even After Strong Capital One Bowl Performance - NESN.com Skip to content This bowl season is almost in the books, and there have been quite a few impressive performances that stand out and a few that make you shudder.

Georgia’s Jarvis Jones recorded a pair of sacks in the Bulldogs’ Citrus Bowl win over Nebraska, further solidifying his place among the best in this year’s draft class. Meanwhile, none of the top quarterbacks made an impression worth remembering and could see their stocks drop like flies over the next few months.

Even ahead of his appearance in the Cotton Bowl on Friday night, Luke Joeckel jumped three spots up to the top of the draft board as Kansas City needs to establish better protection before bringing in a new franchise quarterback. Jones didn’t drop too far from that top spot, though, sliding just down to No. 3 where the Raiders could use his help in the pass rush off the edge.

There was plenty of movement in this week’s mock draft with three prospects saying goodbye and welcoming three newcomers to the stage. So, let’s jump right in and see just what’s changed over the past week.

1. Kansas City Chiefs (2-14):
Luke Joeckel, OT, Texas A&M [Previous pick: Jarvis Jones, OLB, Georgia]
The Chiefs desperately need a quarterback, but none of the options available through the draft make any sense here. So, what’s the next best thing? How about a franchise left tackle? Joeckel’s got the skills to be that guy, and he should help shore up the offensive line if and when KC brings in Alex Smith or another reliable veteran to run the show.

2. Jacksonville Jaguars (2-14):
Star Lotulelei, DT, Utah
The Jaguars are the worst team in the NFL on the pass rush, so with Lotulelei and recently acquired defensive end Jason Babin, maybe Jacksonville can get out of the sack cellar next season.

3. Oakland Raiders (4-12):
Jarvis Jones, OLB, Georgia [Previous pick: Bjorn Werner, DE, Florida State]
He was No. 1 on here for the first two weeks, and yet after two sacks in Georgia’s Citrus Bowl win he drops that many spots. The logic here is strictly need-based, and pass rush is somewhere Oakland desperately “needs” help. Jones is an elite-level talent and should offer double-digits sacks every season.

4. Philadelphia Eagles (4-12):
Bjoern Werner, DE, Florida State [Previous pick: Luke Joeckel, OT, Texas A&M]
The Eagles’ pass rush was rather unimpressive in 2012 and they could use some help off the edge to help improve their defense next season. Werner possesses both the strength and speed to get the edge against NFL tackles, which should help Philly.

5. Detroit Lions (4-12):
Dee Milliner, CB, Alabama [Previous pick: Chance Warmack, G, Alabama]
The Lions need help in the secondary and Milliner is the best option to provide such assistance in this draft class. He’s not exactly Champ Bailey on the outside, but he stood out against some of the best receivers in the SEC, which should count for something.

6. Cleveland Browns (5-11):
Damontre Moore, DE, Texas A&M
Jabaal Sheard could use some help rushing off the edge in Cleveland and Moore could be just the guy to help pressure the quarterback. He?s a strong player and if he falls to No. 6 would be quite the steal.

7. Arizona Cardinals (5-11):
Geno Smith, QB, West Virginia [Previous pick: Matt Barkley, QB, USC]
His numbers were good in the Pinstripe Bowl, but Smith appeared bothered by the wintry weather at times, which should factor into a number of teams’ (Buffalo Bills, New York Jets) scouting reports on him. He’s still a quality quarterback prospect and should rank ahead of Matt Barkley, Mike Glennon and the rest of this class’ signal callers, and he should be a good fit in the Arizona weather.

8. Buffalo Bills (6-10):
Barkevious Mingo, DE, LSU [Previous Pick: Geno Smith, QB, West Virginia]
Smith might be the only quarterback even worth considering with a pick this high. So, without any quarterback choices, the Bills can opt to get some help for Mario Williams on the outside. Mingo can play on the line and as a linebacker, which should help complement Williams.

9. New York Jets (6-10):
Jake Matthews, OT, Texas A&M
The Jets need help along the offensive line, and Jake Matthews might be the perfect fit. He has good hands and is strong in the running game, which will be key to turning things around in New York.

10. Tennessee Titans (6-10):
Manti Te?o, MLB, Notre Dame
If you saw what Luke Kuechly did in Carolina this season — oh, only leading the NFL in tackles with 164 — then any team would be wise to snatch Te’o up as quickly as possible. The Titans need help in the middle and Te’o is going to give it to them.

11. San Diego Chargers (6-10):
Chance Warmack, G, Alabama [Previous pick: Dee Milliner, CB, Alabama]
The Chargers could use a solid offensive tackle like Matthews, but Warmack could be the answer to their offensive line woes as well. He’s strong and solid on the inside, which should help offer protection for Philip Rivers. Taylor Lewan is still available, but Warmack seems to be the better selection here.

12. Miami Dolphins (7-9):
Keenan Allen, WR, California [Previous pick: Barkevious Mingo, DE, LSU]
Allen is in the mold of a Vincent Jackson or Brandon Marshall — a tall, fast receiver with big-play ability — which is something the Dolphins desperately need. Brian Hartline and Davone Bess are good receivers, but they need a big-play guy like Allen on the outside to help Ryan Tannehill develop.

13. Tampa Bay Buccaneers (7-9):
Dion Jordan, DE, Oregon [Previous pick: Johnthan Banks, CB, Mississippi State]
Jordan is big and physical, plus he?s got the speed to get after the quarterback, which coach Greg Schiano should love. He’s strong and quick on the outside and gives the Bucs another good, young pass rush option to help ease things up for a developing secondary.

14. Carolina Panthers (7-9):
Taylor Lewan, OT, Michigan
Cam Newton is the Panthers? franchise quarterback, and they?d like to keep it that way. Jordan Gross gives Carolina protection on one side of Newton, but the addition of Lewan would give the Panthers the pair of bookend tackles they so desire.

16. St. Louis Rams (7-8-1):
Justin Hunter, WR, Tennesse
Sam Bradford made some strides in 2012, but he?ll need even more help on the outside for the Rams’ offense to keep improving. Hunter could be that guy, giving Bradford the No. 1 receiver he?s always desired.

17. Pittsburgh Steelers (8-8):
Johnathan Hankins, DT, Ohio State [Previous pick: John Jenkins, DT, Georgia]
Casey Hampton (36 years old) sure isn’t getting any younger, and Hankins could be his perfect successor up the middle for the Steelers? defense.

18. Dallas Cowboys (8-8):
Matt Barkley, QB, USC [Previous pick: Sylvester Williams, DT, North Carolina]
Jerry Jones put his support behind Tony Romo after another mediocre season in Dallas, but that might just be posturing. Romo is still the guy for the Cowboys, but he’ll be 33 ahead of next season and Barkley could use some time to learn before jumping into the job.

19. New York Giants (9-7):
Ezekiel Ansah, DE, BYU [Previous pick: Kenny Vaccaro, S, Texas]
He’s a bit inexperienced, as the former track star only started playing football in 2010, but Ansah boasts incredible size (6-foot-5, 270 pounds), strength and quickness. His production wasn’t great at BYU with just 4 1/2 sacks in 2012, but comparisons to Jason Pierre-Paul and Chandler Jones should be enough for the Giants to take a chance.

20. Chicago Bears (10-6):
Eric Fisher, OT, Central Michigan
Jay Cutler needs some time in the pocket, and Fisher can help. He?s big, strong and physical and should help keep Cutler upright more often, which should also help Brandon Marshall, Alshon Jeffrey and the rest of the receivers.

21. St. Louis Rams [via Washington Redskins (10-6)]:
Jonathan Cooper, OG, North Carolina
Cooper should help out alongside Rodger Saffold in securing Bradford in the pocket. With some good blocking up front, maybe we can finally see the type of quarterback Bradford can actually be at the pro level.

22. Minnesota Vikings (10-6):
Terrance Williams, WR, Baylor
Williams has prototypical size (6-foot-2), boasts great hands and should make a solid target for Christian Ponder to throw at, which the Vikings so desperately need.

23. Cincinnati Bengals (10-6):
Sylvester Williams, DT, North Carolina [Previous pick: Anthony Barr, OLB, UCLA]
Williams has great speed, hands and strength up the middle. That would bode well for the middle of the Cowboys? defense and should help Marcus Spears, Anthony Spencer and DeMarcus Ware coming off the edge, too.

25. Seattle Seahawks (11-5):
Zach Ertz, TE, Stanford [Previous pick: Tavon Austin, WR, West Virginia]
Zach Miller was good in 2012, but the Seahawks could use a consistent pass catcher at the tight end position to help out Russell Wilson. Ertz can be just that in the passing game, as he showed at Stanford, and he’s a good blocker on runs.

26. Indianapolis Colts (11-5):
John Jenkins, DT, Georgia [Previous pick: Dion Jordan, DE, Oregon]
The Colts are just plain awful against the run, and Jenkins can help.  He takes up multiple blockers at times and would help open up rushing lanes for Dwight Freeney and Robert Mathis. The Colts are on the verge of building something great, but first they need to stop the run.

27. Green Bay Packers (12-4):
Alec Ogletree, MLB, Georgia [Previous pick: Corey Lemonier, DE, Auburn]
The Packers need a consistent linebacker to take care of the middle of the field. Ogletree is a bit raw, but he has great size (6-foot-3 and 240 pounds) and runs with the speed of a defensive back. If he figures out how to harness that athleticism, Ogletree may even be a better pro than Te?o.

29. Houston Texans (12-4):
Cordarrelle Patterson, WR, Tennessee [Previous pick: Robert Woods, WR, USC]
Matt Schaub needs a reliable receiver opposite Andre Johnson. With Johnson on one side and Patterson on the other, the Texans’ passing game would be even more dangerous than it is already.

30. New England Patriots (12-4):
Kenny Vaccaro, S, Texas [Previous pick: Keenan Allen, WR, California]
The Patriots were one of the worst teams against the pass this season, and the safety position seemed like a constant revolving door. Vaccaro is the best safety available, although Florida’s Matt Elam would make a good selection here, too. Either way, Bill Belichick could use some help over the top for alongside Devin McCouty, and Vacarro’s solid coverage skills should fit in just fine.

31. Atlanta Falcons (13-3):
Alex Okafor, DE, Texas [Previous pick: Zach Ertz, TE, Stanford]
The Falcons already have a good pass rush, but John Abraham (already 34) isn’t getting any younger. Okafor is a safe bet to be productive at the pro level and could learn a thing or two from Abraham before he calls it quits.

32. Denver Broncos (13-3):
Shariff Floyd, DT, Florida [Kawann Short, DT, Purdue]
The Broncos need some help inside on defense, and Floyd could be the perfect solution. He’s a big force up the middle and played well even in the Gators’ blowout loss to Louisville in the Sugar Bowl. He could help a budding Broncos defense get even better next season. 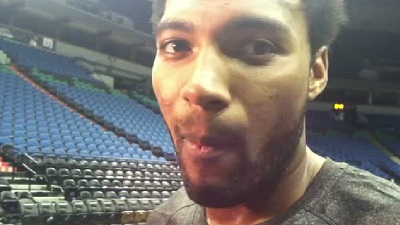 Minnesota Timberwolves Forward Lazar Hayward Says He Has Seen ‘Spirit,’ But Has Not Talked to One Yet