Richard Sherman has had quite a year.

After emerging as one of the top rookies in the league last year, perhaps Sherman thought he wasn’t getting enough notoriety. He’s more than made up for it this year. First, the Seahawks’ cornerback trash-talked Tom Brady after Seattle beat New England. Then he nearly got suspended four games — but won his appeal. Now he’s getting getting hit in the face after winning his first career playoff game.

We have no idea what happened after the Seahawks beat the Redskins, but Redskins tackle Trent Williams‘ emotions clearly got the best of him, and he hit Sherman in the face. Sherman didn’t appear to be too bothered by it as he backed off Williams and smiled.

Then Sherman waived bye-bye to the Redskins as if that “Na na na na, hey hey hey, goodbye” song were playing. The Seahawks’ and Redskins’ players were getting into it all game, though we didn’t see Sherman take part in any scuffles. It was mostly Brandon Browner, the Seahawks’ other cornerback.

Sherman was quiet all game, but that was mostly because the Redskins’ quarterbacks were avoiding throwing at him. Browner got picked on when Washington was able to complete any passes.

It wasn’t all trash talk for Sherman after the game, though. FOX showed the Pro Bowl snub talking to Robert Griffin III for an extended period of time after the game, patting him on the head and back.

Watch Sherman get mushed in the face in the GIF below. 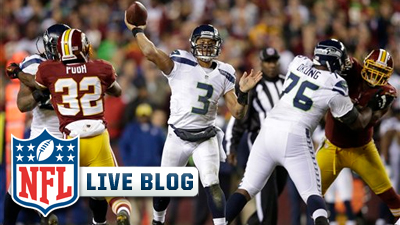