Vote: Who Is the Greatest Quarterback in Jaguars History? - NESN.com Skip to content Mark Brunell: Brunell was the face of the Jaguars for the first nine years of their existence. He still owns most of Jacksonville?s major passing records. Brunell played from day one in Jacksonville after the team traded a third- and fifth-round pick to the Packers to acquire the University of Washington product.

Byron Leftwich: The Marshall product was taken with the No. 7 overall pick, but never truly lived up to his draft slot. He replaced Brunell in 2003, but had to fight David Garrard for the starting spot until 2007, when he was released and Garrard was named the starter.

Leftwich?s long, slow release may be what he?s best known for, but his big arm and toughness are just as important to his legacy. The big, bruising quarterback?s best season came in 2005 when he led the team to an 8-3 record in his 11 starts while throwing 15 touchdowns to just five interceptions.

David Garrard: Garrard was drafted by the Jaguars in 2002, but didn?t get a chance at a full-time starting role until 2006 with Brunell and Leftwich in his way. Starting Garrard paid off for the Jags in 2007, when he led them to the playoffs before losing to the Patriots in the divisional round.

Garrard?s best season came that year when he threw for 2,509 yards, 18 touchdowns and five interceptions in 12 starts. Garrard made a Pro Bowl in 2009 when he took the team to a 7-9 record while throwing for 3,597 yards, 15 touchdowns and 10 interceptions. Garrard was released in 2011 after Blaine Gabbert was named the team?s starter.

Chad Henne: This may look ridiculous, but there are no other legitimate fourth options. The other choices are Gabbert, Quinn Gray, Steve Beuerlein, Jonathan Quinn, Jamie Martin, Jay Fiedler, Luke McCown and Rob Johnson.

Henne looked so much better than Gabbert in 2012 that it would be impossible to use the second-year bust. Henne drastically improved the Jaguars after Gabbert went down with an injury and effectively ended the No. 10 overall pick?s career as a starting quarterback just a year and a half into his NFL tenure. 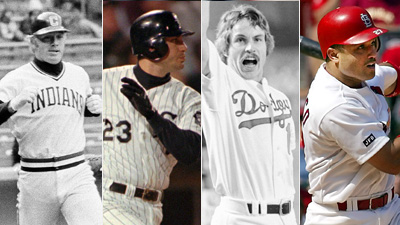 Vote: Who Is the Most Undervalued Third Baseman in the History of Major League Baseball?