Who can forget “Pizzagate?”

It was the seventh inning of the Red Sox’ Patriots’ Day tilt with the Angels back in 2007. J.D. Drew hit a popup down the left-field line that landed in the first row. In addition to a fan spilling beer all over the place, a rather bizarre event took place. A different fan a few rows back took it upon himself to toss a slice of pizza at the fan going for the ball. The strange sequence sent NESN’s Don Orsillo and Jerry Remy into hysterics, and has since been dubbed “Pizzagate” in many Red Sox Nation circles.

Don, Jerry and Jenny Dell stopped by to talk with Teddy McKay and Sandra Harris of WHOM 94.9 in Portland on Thursday as part of the NESN Spring Training Kickoff Tour. They discussed a number of topics, but it didn’t take long before “Pizzagate” came up. Don and Jerry still remember the incident like it was yesterday, and actually consider it to be one of their favorite broadcasting moments together.

Jenny wasn’t around at NESN for “Pizzagate,” but she has already had her fair share of laughs with the crazy duo. Check out the trio’s hilarious radio interview by clicking on the link below.

Click here to listen to Don, Jerry and Jenny on WHOM in Portland >> 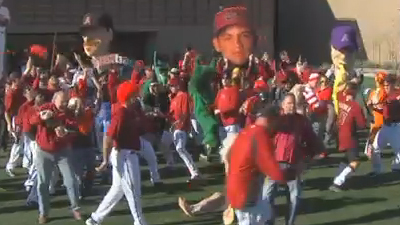