The NESN Spring Training Kickoff Tour is in full swing. On Day 1, Jerry Remy, Don Orsillo and Jenny Dell packed their bags and headed up north to Burlington, Vt.

On a day in which President Barack Obama gave a State of the Union address, The RemDawg addressed the State of Red Sox Nation. Jerry, Don and Jenny stopped by the Vermont State House, during which Jerry got to lay down the gavel while a number of legislators, including Lt. Gov. Phil Scott and Speaker of the House Shap Smith, joined in the fun.

Plenty of excited Red Sox fans also joined the crew to show their support and further prove that there’s quite the buzz surrounding this year’s Red Sox team. Vermont state representative Christopher Pearson was among those excited to see NESN’s on-air trio drop by, even taking to social media to express his appreciation.

The Vermont State House wasn’t the only stop of Day 1, though. Jerry, Don and Jenny also visited the Vermont Tourism Office.

The NESN Spring Training Kickoff Tour, which includes stops in five cities over four days, will head to Connecticut on the morning of Day 2 before stopping in Springfield, Mass., later in the day. Jerry, Don and Jenny are scheduled to conduct a radio interview with WTIC 1080 at 7:50 a.m., and they’ll do a television interview with WTIC FOX CT Morning News at 9 a.m.

To follow the NESN Spring Training Kickoff Tour, be sure to check back with NESN.com throughout the week. Also, be sure to follow along on Twitter @NESN using the hashtag #NESNTour. 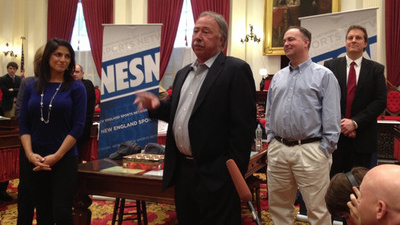