Ready for a juicy trade rumor?

The Celtics are conducting “preliminary talks” with the Los Angeles Lakers about swapping Rajon Rondo for Dwight Howard, according to CBSSports.com’s Ken Berger. While Berger points out that the deal “hasn’t gained any traction,” it seems like, at the very least, the Lakers and Celtics are talking about the possibility of trading two of their biggest stars.

While the two teams may not be ready to pull the trigger on the potential blockbuster just yet — considering Rondo is out with a torn ACL and Howard is playing at less than 100 percent — the two rivals might be willing to revisit the deal this offseason.

“It’s possible that the talks could be tabled until after the season,” Berger writes. “In that case, Howard would have to agree to a sign-and-trade to the Celtics.”

There would need to be some serious cap maneuvering by both teams to get a deal done involving the two stars, since Rondo makes just $11 million in salary while Howard is on the books for closer to $20 million per year. 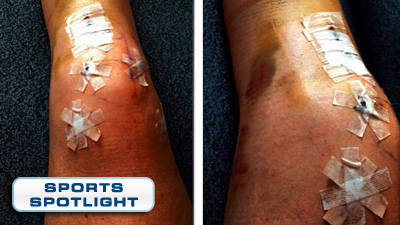 Lindsey Vonn Posts Picture of Knee to Instagram, Jokes She’ll Have to Wear Long Skirts to Cover It (Photo)