Is it April yet?

The Red Sox are continuing to push through their Grapefruit League schedule, which is nice, but one can’t help but get a little antsy for the upcoming regular season, especially since this year should be an interesting one.

The Sox are obviously coming off a train wreck of a season, so expectations amongst Sox fans have been tempered a bit. However, this has the look and feel of a completely different ball club. Now, it’s time to figure out whether the abundance of changes will make the team better.

Sure, it’s nice that the Sox brought in some high-character guys, now have the manager they wanted all along and have placed an emphasis on player development. But will the formula lead to success in 2013 and beyond?

You asked that and more as part of this week’s mailbag, so let’s reach into the big ol’ sack and see what else you came up with.

Having been a die-hard Sox fan all my life, is it my biased, unbridled optimism, or have the additions of Mike Napoli, Shane Victorino, Jonny Gomes, et al. put the Sox in position to go from worst to first ?
–Mark J. Anderson, Spokane, Wash.

Congratulations, Mark. You have the honor of this season’s first mailbag question. And it’s not just because I visited Spokane a number of times while my brother was stationed out there.

Anywho, I don’t think you’re alone in your optimism, and it’s because the Sox really do stand a chance this season. The American League East is certainly deep, but the Sox have improved by way of their additions, and there are some questions among the other clubs that make it realistic to think Boston could at least be competitive.

The Yankees are banged up, as they’ll start the season with a depleted lineup that lacks Alex Rodriguez, Mark Teixeira and Curtis Granderson. Plus, there are other players whose health status could change at the drop of a hat, including CC Sabathia, Derek Jeter, Mariano Rivera, Andy Pettitte and Phil Hughes, and there are general concerns about whether the pitching staff is deep enough. I really don’t think there’s a more important player in baseball this season than Robinson Cano, who is in a contract year and figures to be New York’s one constant. With all of this said, it wouldn’t be shocking to see the Yankees near the cellar rather than the top of the heap when things are all said done.

Obviously, the Yankees aren’t the Red Sox’ only concern in what is a solid division top to bottom, but the other AL East foes have some questions of their own. The Rays no longer have one of their workhorses in James Shields. They should be able to weather the storm, and the Shields trade was actually a great one for them in terms of the future, but the loss of a bona fide front-end starter will hurt. And considering the Rays rely so heavily on their pitching, it could create some problems.

The Orioles, who were a feel-good story in 2012, are finally on the map and in the discussion during spring training. That’s great for baseball and the city of Baltimore, but it also means the O’s have some lofty expectations. And while things are looking up, it’s hard to imagine them repeating their 29-9 record in one-run games. It’ll ultimately come down to the starting pitching holding up (shocking, right?), and the rotation doesn’t appear all that daunting. Manager Buck Showalter will have to work some magic again this season.

The team that poses the biggest threat on paper is the Blue Jays. The key words in that sentence, however, are “on paper.” We saw the Marlins — a team who many dubbed perennial contenders going forward — flop in 2012 despite some bold offseason moves and the acquisition of solid talent. I don’t expect that to happen in Toronto, as the Jays were already a competitive bunch and have a nucleus that is far better than the one that was assembled down in South Beach, but John Gibbons will have to prove he’s the right guy to manage the club. The Jays look like the best team in the AL East, but it’s hard to firmly slap the label on them without them proving anything on the field yet.

Basically, this is my long-winded way of saying that the Red Sox could certainly contend in 2013. It’s definitely an optimistic outlook, but the Sox are a far cry from a 69-93 team. For a number of reasons, things spiraled out of control last season, and it essentially looked like they were playing out the string near the end of the year. This year marks a fresh start, though, and the pieces are in place.

One thing that should work in Boston’s favor is its deep bullpen. The O’s enjoyed so much success last season because of their bullpen, and the Sox will enter the year with the pen as one of its strengths. Now, if Jon Lester and Co. can put together a respectable campaign and ensure the bullpen isn’t overworked, we should see a competitive team taking the field in Boston.

Will the Red Sox actually be watchable this year?
–Dave Queen, via Facebook

Do you feel that what happened with Alfredo Aceves on Saturday will decide his future with the Red Sox?
–Keith Turner Sr., via Facebook

Well, it’s no secret that Aceves has been skating on thin ice recently because of his rather unusual behavior, so his involvement in Saturday’s World Baseball Classic brawl certainly won’t help his cause. That being said, if the Sox do move on from the mercurial right-hander, it might be more a result of what they have in the pitching department.

The Red Sox’ starting rotation appears set — with Lester, Clay Buchholz, Ryan Dempster, John Lackey and Felix Doubront taking up the five spots — so Aceves would likely be used in a long relief/spot starter role. The club also has Franklin Morales and Andrew Miller who could serve in similar capacity, though, and Rubby De La Rosa and Allen Webster — the two pitchers obtained from the Dodgers in last August’s megadeal — look like they’re big league ready.

If something happens to the Sox’ rotation, there are other arms standing by, so Aceves’ value seems to be decreasing, especially when you factor in his unpredictable nature. We shall see, though. I really wouldn’t be surprised by anything at this point.

Is Terry Francona going to manage the Indians?
–Bill Gross, via Facebook

When will the Red Sox realize that Ryan Lavarnway cannot hit nor field as a catcher, therefore trade him so that Christian Vazquez and Dan Butler can get more shots in the organization?
–Riley Austin, via Facebook

Well, I’m not sure that I’m willing to write off Lavarnway just yet, but he does have some flaws, and I certainly understand your desire to see more of Vazquez and Butler.

Lavarnway’s biggest asset has always been his bat, particularly his power. But as he continues to progress as a catcher, it looks like he’s having a hard time adjusting to big league pitching. He had every opportunity to seize the moment and make sure he’d be a fixture in the 2013 lineup last season, but he hit just .157 and posted a .459 OPS in 153 at-bats. It was not only disappointing, but it was also enough for the Sox to explore other options — hence the David Ross signing. I still think Lavarnway has the potential to turn things around, and his defense behind the plate has come a long way since he was drafted in 2008, but he’ll turn 26 in August. At some point, the training wheels need to come off, and last season showed he wasn’t exactly ready to ride. As far as a trade, it’s possible, but the Red Sox would be better off waiting until later in the season and hoping that Lavarnway can increase his value over the first few months, because his stock has definitely dropped over the past year.

If the Red Sox were to explore trading Lavarnway, it would definitely be because of the organizational depth at the position, as Blake Swihart is also in the mix. Vazquez has been especially impressive this spring training, though, and his absolute cannon is a deviation from what we’ve come to expect out of Boston’s catchers, who are generally lauded more for their offensive potential. Vazquez probably has another year or two of seasoning before he’s ready to make a run at the big club, but beyond Jackie Bradley Jr., he’s stood out more than anyone early on this spring.

Vazquez is just 22, and he will need to continue developing as a hitter, but he isn’t a slouch at the dish, and his defensive aptitude will be enough to keep him around the game for a while. The young backstop was clocked at around 1.8 seconds in delivering a throw to shortstop Jose Iglesias to nab a would-be base stealer during Thursday’s game, and he once again showed off his rocket in gunning down a baserunner on Sunday. My only concern with him from a defensive standpoint is that he gets a little trigger happy with that weapon he calls an arm, as he’ll frequently try snap throws down to first. While I’m all for an aggressive approach, he probably needs to settle down a little bit in an effort to steer clear of any unnecessary risks. All in all, though, it’s hard not to like what Vazquez brings to the table, and I’m all for seeing if he’s capable of being Boston’s catcher of the future. 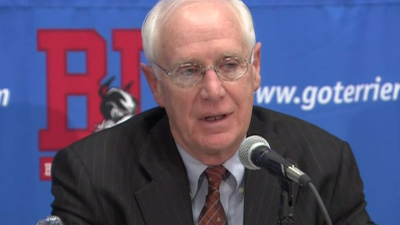