We’re taught at a young age that hard work is rewarded. Perhaps there should be a disclaimer.

Jackie Bradley Jr. added to his impressive spring resume (again) on Monday, and he’s making it harder and harder (again) to defend any decision other than penciling him into the Red Sox’ Opening Day starting lineup.

Bradley entered Monday’s game as a pinch hitter in the seventh inning, and he promptly lined a game-tying, two-run single up the middle off Pedro Strop. Then, with the Red Sox trailing 12-9 with two outs in the ninth, Bradley lined a triple over the head of right fielder Conor Jackson.

What’s even more amazing about Bradley’s spring is that the outfielder’s offensive game has never really been considered his bread and butter. The 22-year-old holds a career .311 average and .423 on-base percentage in 138 minor league games spread out over four levels, but it’s his defensive aptitude that has typically been lauded by scouts.

Bradley is armed with great instincts, a quick first step and great range in the outfield, all of which put him on the fast track to the majors. After watching Bradley develop even more offensively, though, we’re learning that the track he’s been speeding on is shorter than originally thought. And that’s a testament to the hard work he’s put in and the quick adjustments he’s been able to make.

“Even against a left-hander who has decent stuff, he takes a strike, he’s not afraid to hit deep in the count with two strikes and gets a breaking ball middle of the plate,” manager John Farrell told reporters after Monday’s game. “And what was even more impressive I think, is after a day yesterday when some left-handers tied him up a little bit, he came back today against a left-hander with some quality stuff  and put a good swing on the ball.”

Bradley has been under a microscope all spring; even more so after a scorching hot start. He’s responded by not only keeping up a head-turning pace, but by also improving. It’s been quite incredible, really, and it’s now hard to envision him starting the season anywhere other than the Bronx, where the major league club opens its season against the Yankees on April 1.

The logic behind starting Bradley in the minors makes a lot of sense. Bringing him up on or after April 12 would ensure he’s under team control through 2019, rather than through 2018. Sure, that seems very forward-looking, but Bradley will presumably be in the prime of his career at that point, and the extra year could be valuable.

Starting Bradley in the minors is the best course of action for the Red Sox to take when looking through a long-term lens, but admittedly, there is something a bit unsettling about the young outfielder being relegated to the minors for at least 11 days. Bradley has done everything he could possibly do. He’s passed every test. He’s thrived under pressure. And most of all, he’s done it with class and professionalism.

Based on what we’re taught growing up, Bradley should be a lock for the Opening Day roster. What we’re not taught in Little League, though, is that baseball is a business. So as unsettling as it is, the debate is still very much alive, through no fault of Bradley’s. 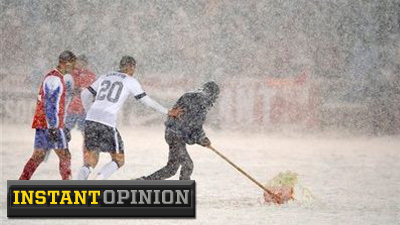