For some people who find athletic fame, the road is long and winding, including years of hard work to break through and make their name on their desired stage.

Svetlana Pankratova has had such a winding path, but it didn’t come when she sought basketball success. That was the easy part. For Pankratova, her longest journey was the six years it took for her to officially achieve the title of having the world’s longest (female, mind you) legs.

Pankratova finally won that distinction after six years of pursuing the record, and it’s been her calling card since. The former Russian basketball star, who played her college ball at Virginia Commonwealth University, is now getting recognition again as she helps coach high school basketball in Virginia. Pankratova married local resident Jack Gosnell and is an assistant coach at George Mason High School.

That has brought Pankratova and her famous legs — measured at four feet, four inches (she’s 6-foot-5) — attention from the local press. It’s also attracted the attention of sites like yours truly, and Yahoo! Sports, which found the wonderful video below where Pankratova gets her Guinness World Record recognition.

It’s not a bad achievement for a hoops star, and not a bad addition to the Falls Church, Va., community. You see, a normal player without Anthony Davis‘ wingspan would only be grabbing J.J. Hickson‘s ear, not his nose. “The [skate blade of Tuukka Rask] got my puck, and usually I just push it in. It [stinks] not to score that. If the blade doesn’t touch I can just [push it] because his pad is pretty weak against the stick. I had room to put it under, but then I just took the safe way. It’s a little unlucky. Now I look like a fool.”
— Kaspars Daugavins, on opening the door for the Bruins to beat the Senators on Monday night

This is what Kaspars Daugavins did Monday night.

This is what he was trying to do. 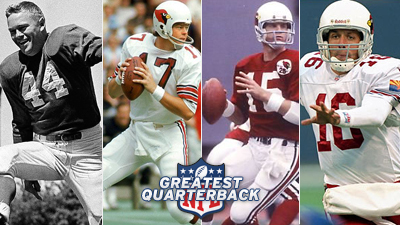 Vote: Who Is the Greatest Quarterback in Cardinals History?