A wild week at the NFL combine produced some fast risers and a few big-time losers, but that’s not the whole story pertaining to this year’s draft.

While Tavon Austin, Lane Johnson and Geno Smith were wowing scouts in Indianapolis, Andy Reid and the Kansas City Chiefs, who just so happened to hold the No. 1 overall selection, were busy working the phone lines to lock down the future of their offense.

The Chiefs ultimately secured a deal for quarterback Alex Smith, which quelled all rumors of the aforementioned Geno going in the top spot. As for the heavy favorite Luke Joeckel, his chances at being the first name called took a significant hit as well when the Chiefs decided to hit left tackle Branden Albert with the franchise tag.

Now, the Chiefs could be looking to their defense as the necessary area to improve via the draft. Defensive tackle Dontari Poe was their selection in the first round last April, but with Glenn Dorsey on his way out the door and a 4-3 base the defense of choice, maybe another talented tackle would be the right call for KC.

There have plenty of movers and shakers over the past week, and with free agency on the horizon some glaring needs will be met even before draft day. In the meantime, let’s take a peek at where some of these guys are projected to fall.

2. Jacksonville Jaguars (2-14): Luke Joeckel, OT, Texas A&M
Let’s face it, Eugene Monroe is a solid left tackle, but the Jaguars would be better off protecting their quarterback, whoever that may be, with a pair of bookends.
Previous pick: Barkevious Mingo, DE, LSU

3. Oakland Raiders (4-12): Geno Smith, QB, West Virginia
I’m not sure the fit make all that much sense, especially with Terrelle Pryor showing positive signs at the end of last season, but Smith was impressive at the combine and the interest seems real.
Previous pick: Star Lotulelei, DT, Utah

4. Philadelphia Eagles (4-12): Eric Fisher, OT, Central Michigan
Fisher has the measurables and put up a terrific performance at the combine, which all but solidified his place among the top 10 players in this draft. Philly needs some help on the O-Line and Fisher seems like the perfect fit.
Previous pick: Bjoern Werner, DE, Florida State

6. Cleveland Browns (5-11): Barkevious Mingo, DE, LSU
Mingo was even more athletic than anticipated in Indy. The Browns could use a solid edge rusher, especially one with as much raw talent as Mingo.
Previous pick: Chance Warmack, G, Alabama

7. Arizona Cardinals (5-11): Matt Barkley, QB, USC
Barkley didn’t compete in Indy, but he did impress with his intellect and attitude during interviews. He was the No. 1 prospect coming into the college football season, and Bruce Arians should see him that way.
Previous pick: Geno Smith, QB, West Virginia

8. Buffalo Bills (6-10): Dee Milliner, CB, Alabama
Offense seems like the obvious area to address here, but both quarterbacks are gone. Plus, when a rare talent like Milliner, who ran great (4.37 40-yard dash) at the combine, sticks around this long you’ve got to take him.
Previous pick: Matt Barkley, QB, USC

9. New York Jets (6-10): Jarvis Jones, OLB, Georgia
Cornerback is a real need for the Lions, but Jones is arguably the best pass rusher in this class and should make a seamless transition to the NFL game.
Previous pick: Cordarrelle Patterson, WR, Tennessee

10. Tennessee Titans (6-10): Star Lotulelei, DT, Utah
Star is a big-time risk now, given the heart condition found at the combine. He’s still a top-five talent, though, and the Titans might see the potential reward as worth it.
Previous pick: Shelden Richardson, DT, Missouri

11. San Diego Chargers (6-10): Lane Johnson, OT, Oklahoma
Both Joeckel and Fisher should be off the board here, but Johnson is the next best thing. He had an incredible workout in Indy, even running a 4.7 40, and should be a steal for most any team looking for their left tackle of the future.
Previous pick: Eric Fisher, OT, Central Michigan

12. Miami Dolphins (7-9): Bjoern Werner, DE, Florida State
They might wait on a wide receiver in hopes of drafting Texas A&M’s Ryan Swope, who has a great rapport with Ryan Tannehill. Werner is still around and would be a great addition for Miami alongside Randy Starks and Cameron Wake.
Previous pick: Dee Milliner, CB, Alabama

13. Tampa Bay Buccaneers (7-9): Xavier Rhodes, CB, Florida State
The Bucs were arguably the worst team against the pass last season and they need quick help to turn that secondary around. Rhodes has a great combine and seems like a good fit as a press corner in Greg Schiano‘s system.
Previous pick: Damontre Moore, DE, Texas A&M

14. Carolina Panthers (7-9): Chance Warmack, G, Alabama
Warmack is the best player in this draft on film. If he was even two inches taller, he’d be a left tackle and the first player taken without a doubt. Guards are never taken this high, but with Warmack an exception should be made.
Previous pick: Johnathan Hankins, DT, Ohio State

15. New Orleans Saints (7-9): Ezekiel Ansah, DE/OLB, BYU
Ansah showed just how athletic he could be at the combine and now looks like a definite option as an outside linebacker. He’s still a raw prospect but is learning fast and seems to have endless upside.
Previous pick: Kenny Vaccaro, S, Texas

16. St. Louis Rams (7-8-1): Jonathan Cooper, OG, North Carolina
Cooper had a great workout at the combine and all but asserted his place among the top players in this draft.

17. Pittsburgh Steelers (8-8): Shelden Richardson, DT, Missouri
Casey Hampton‘s getting old and the Steelers need an heir to his throne. In walks Richardson all 6-foot-3 and 300 pounds of him.
Previous pick: Dion Jordan, DE, Oregon

18. Dallas Cowboys (8-8): Tavon Austin, WR, West Virginia
No one helped himself more in the combine than Austin. Running a 4.34 will get you noticed, but posting an incredible workout top to bottom makes you even more desirable. The Cowboys have cornerstones on the outside with Dez Bryant and Miles Austin, not it’s time to get a dangerous slot receiver and finish off the set.
Previous pick: Shariff Floyd, DT, Florida

20. Chicago Bears (10-6): Tyler Eifert, TE, Notre Dame
Let’s be real here, the Bears need some help for Jay Cutler. Whether that help is an offensive tackle or a tight end, he needs something to get this passing game going. Not to mention, Marc Trestman’s roots are in building offenses.
Previous pick: D.J. Fluker, OT, Alabama

22. St. Louis Rams [via Washington Redskins (10-6)]: Cordarrelle Patterson, WR, Tennessee
Patterson lived up to the billing physically at the combine, but his interviews raised some questions about his character and aptitude. He’s still a top-20 talent, so the Rams would be elated to scoop him up here.
Previous pick: Keenan Allen, WR, California

23. Minnesota Vikings (10-6): Keenan Allen, WR, California
Not working out at the combine has some teams passing on Allen for now. A good showing at Cal’s pro day should get him back in the No. 1 wide receiver conversation.
Previous pick: DeAndre Hopkins, WR, Clemson

26. Green Bay Packers (12-4): Kevin Minter, MLB, LSU
A.J. Hawk should be done in Green Bay and the Packers need a consistent linebacker to run the middle of their defense. Manti Te’o could be in play here, but his 4.82 40 time won’t be too attractive to the Pack or any other team.
Previous pick: Manti Te?o, MLB, Notre Dame

27. Houston Texans (12-4): Jonathan Cyprien, S, Florida International
While wide receiver is a need, they also need to lock up some of their key free agent. Glover Quin should be a hot target for teams in free agency, and if he leaves then the Texans will need a solid replacement.
Previous pick: Justin Hunter, WR, Tennesse

29. New England Patriots (12-4): Desmond Trufant, CB, Washington
The Patriots like fast, physical corners and Trufant, who ran a 4.38 at the combine and measured at a little over 6-feet, is just that. They need secondary help and Trufant may be able to assist right away.
Previous pick: Tavon Austin, WR, West Virginia

30. Atlanta Falcons (13-3): Datone Jones, DE, UCLA
The Falcons have a few needs this offseason and drafting Tony Gonzalez‘s heir is definitely one of them. With his decision still pending, replacing John Abraham‘s production on defense might be a bigger problem to deal with.
Previous pick: Eddie Lacy, RB, Alabama

31. San Francisco 49ers (11-4-1): Matt Elam, S, Florida
He’s been rising and falling on this draft board for weeks, but a solid combine performance, including a faster than expected 40 time, carves him out a place as Dashon Goldson‘s replacement in the Bay.
Previous pick: Jonathan Jenkins, DT, Georgia

32. Baltimore Ravens (10-6): Terron Armstead, OT, Arkansas Pine-Bluff
The Ravens may want to replace Ray Lewis here, but after John Harbaugh‘s reaction to Te’o’s sluggish 40, that may not be an option. Armstead, an offensive lineman mind you, ran almost two seconds faster than Te’o in the 40 — yup, all 6-foot-5 and 305 pounds of him. Baltimore needs a tackle to replace Bryant McKinnie and Armstead seems like a viable option.
Previous pick: Kevin Minter, MLB, LSU 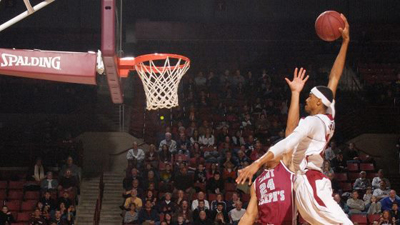 UMass Can Get Shot at NCAA Tournament At-Large Bid With Wins Over Butler, Rhode Island