Tiger Woods‘ win in the WGC-Cadillac Championship was mostly a breeze — that is, until a palm tree got in the way.

Woods pushed his tee shot just to the right of the fairway on the 17th hole in the third round at Doral, Fla., on Saturday and his ball got lodged in a palm tree. Woods was on such a roll, though, that he couldn’t even let the errant shot get in his way. The golfer was able to identify that the ball was his, and he took a drop by the tree rather having to go back to the tee to shoot again.

Woods went on to win the tournament for his 17th World Golf Championship title. Woods has five wins in the past year, and this is the first time in five years he has two wins before the Masters. Just one year ago, Woods withdrew from the same tournament after 11 holes with a left Achilles injury. Now he’s the favorite going into the Masters on April 11. Now he’ll just have to hope no one plants any palm trees in Augusta, Ga.

Thumbnail photo via Facebook/Golf from B/R

Poor Brandon Knight. Why did DeAndre Jordan have to be so mean? “When you can win like this, we can go home, we can breathe easier, food tastes better, it makes life a lot better.”
— Ray Allen, enjoying the Heat’s 18-game win streak

Why does time travel have to be so complicated?

Come on, Matt Calvert. It’s not supposed to look that easy. 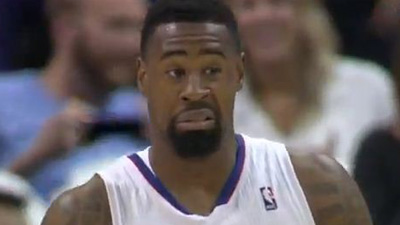 Report: Yankees Trying to Lure Derrek Lee Out of Retirement to Fill in for Mark Teixeira