The B’s dropped a 3-2 decision to the Pittsburgh Penguins, less than 24 hours after one of the most trying days in the history of the city. Instead of serving as a place to escape as it did Wednesday night, the Garden was supposed to be a place of celebration Saturday afternoon. All went to according to plan, except for what the scoreboard read.

While the healing process is far from complete, it’s certain that Bruins fans will continue to care deeply about their team. If the Bruins continue to play like they are right now, B’s fans will also continue to be frustrated.

Right now, it more or less comes down to a few things. The Bruins, who are now 0-3-1 in their last four games, continue to search for more offense and more effective penalty killing.

The latter, which has been a strength for almost the entire season, has become something of a liability. The Bruins have allowed two power-play goals in each of their last three games. While slowing the second-ranked Pittsburgh power play is a daunting task, the Bruins also struggled with the power plays of Carolina and Buffalo, two units that find themselves at or near the bottom of the league rankings.

However, there’s not a ton of concern in the Boston dressing room or coach’s office.

“It?s just you go through ups and downs throughout every season,” forward Brad Marchand said. “Right now it just seems like they?re getting some opportunities and they?re going in. Before, maybe the pucks would hit a stick or we?d get a lucky bounce or what not, but we do have to work on getting pucks out a little more. We?re giving too many opportunities and not getting them out. If we can work on that, it?ll be better.”

It’s often said that the most important penalty killer is the goalie. The Bruins aren’t getting that effort from their goalies at the moment, and B’s head coach Claude Julien was more than willing to point that out.

While the Bruins are having a hard time of keeping the puck out of their own net on the penalty kill, they may be having even more issues with putting it in the cage at the other end. The Bruins, despite outshooting Pittsburgh 40-24, could only get one goal before Tyler Seguin scored a throwaway goal with 2.7 seconds to play. The Bruins have scored just seven goals in that four-game stretch, and they’re struggling to find offense from just about everywhere.

“Of course you get a little frustrated, but again, you just got to find a way,” Seguin said. “When you?re walking out without two points when you feel like you?ve earned the game, it sucks. I think it?s just kind of one of those nights again where you can?t get that bounce one way. But obviously no excuses — we have to find a way.”

Despite another disappointing outcome, the Bruins sounded like a team willing to take even the smallest positives out of a loss.

However, there’s only one week left in the regular season. Time is running out in the effort to get everything squared away before entering the playoffs. Straightening out the penalty kill and finding a way find a groove offensively might be a good place to start. 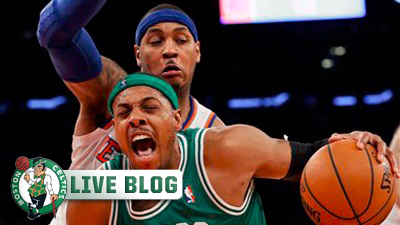 FCC Has No Issue With David Ortiz’s Pregame Speech, Says He ‘Spoke From the Heart’