Final, Knicks 85-78: The Celtics believe they can flip a switch for the postseason, but that switch must not have gotten flipped before this game.

After surging to a 70-67 lead after three quarters, led by Jeff Green’s 24 points, the Celtics and Green disappeared down the stretch. Green took just one shot and had just two points — off a pair of free throws — in the final 12 minutes as the Knicks took control. The Celtics scored eight points in the fourth quarter. Yes, eight.

Carmelo Anthony started hot, got cold and then finished strong to put up a game-high 36 points. He shot just 13-for-29 from the field, though, contributing to New York’s 40-percent shooting. Yet thanks to 20 turnovers by Boston and a 33-4 scoring advantage by New York’s bench, the Knicks were able to triumph.

Fourth quarter, :40.6, Knicks 85-78: If the Celtics lose this, which it increasingly looks like they will, their inability to get the big defensive stops will stand out. On every key possession down the stretch, when they absolutely needed to keep New York from scoring, they could not.

Pierce and Bradley, two of their more reliable defenders, let Martin sneak behind them for an easy layup to give the Knicks a seven-point lead, tying their largest lead of the game. And that basket was assisted by Anthony, his first assist of the game.

Fourth quarter, 1:21, Knicks 83-76: This series is looking a lot like 1-0 New York. Sure, Anthony’s style can be boring to watch sometimes, but it can also be effective. He shook off Green’s defense to hit a long two-pointer to give the Knicks a six-point lead, right after Terry missed again.

Fourth quarter, 2:31, Knicks 81-76: The Knicks got themselves into trouble by going into stand-around iso offense earlier, and now the Celtics are doing them a favor by doing the same. After pulling within three points, Pierce tried to isolate on two straight possessions, leading to a missed three and a turnover for a fastbreak layup by Anthony.

Green, who still leads the Celtics with 24 points, has yet to score in the fourth quarter and has taken just one shot. This is not a matter of him being passive. It’s a matter of his teammates, like Pierce, not getting him the ball.

Fourth quarter, 5:44, Knicks 78-74: This could be trouble for the Celtics. Garnett picked up his fifth foul on an and-one layup by Smith, although the call looks dubious.

That substantially changes how the Celtics can attack these final five-plus minutes. Chris Wilcox and Shavlik Randolph have yet to make an appearance, as Rivers has leaned on his perimeter defenders and Garnett to lock up the Knicks. Without Garnett in the paint, the defensive job could get much tougher for guys like Green, Bradley and Lee.

Fourth quarter, 8:24, Knicks 72-70: The Green-Anthony battle is getting chippy. Anthony tried to muscle up with Green on a couple of possessions, once committing a defensive foul and once forcing Green to pass off.

If the Knicks stay this aggressive on Boston’s top scorer, the Celtics are going to need somebody like Lee or Terry to come through. That would take a drastic turnaround for the Jet. He is 0-for-4 from the field and struggling to keep up with any of the Knicks guards on defense. That could be why Lee and Crawford have gotten their share of minutes.

End of third quarter, Celtics 70-67: Jason Terry has had a hard-luck season, and he is having a hard-luck game. He missed both shots he took, and when he out-hustled Kidd for the slowest-moving offensive rebound in history, he was whistled for a foul.

Despite Terry’s struggles, the Celtics managed to come out of an ugly third quarter with the lead. Pierce and Green, who started the quarter slowly, combined for 11 of Boston’s 17 points as the two teams combined to shoot a putrid 10-for-35 from the field. Anthony and Smith were 4-for-10 in the quarter and Pierce and Green were 2-for-9, but the Celtics duo managed to get to the line, where they were perfect in six attempts. That was the difference as the pivotal final 12 minutes loom.

Third quarter, 2:51, Celtics 63-62: How the Celtics are winning this game is beyond anybody wearing green. The refs have seized control of this game, and not in a good way. At one point they called fouls on four straight possessions, with three of them being dubious.

It has gotten to the point where every call is greeted with an argument. Anthony hacked the heck out of Lee’s arm on a dunk attempt, yet gave a playful smirk as though he disagreed with the call. It’s gotten to that point. Even the correct calls are open to dispute now.

Third quarter, 9:49, Knicks 54-53: The old Anthony is back. Anthony started the second half taking two contested jumpers, missing both, then nailed a three on a frenzied possession in secondary transition. He has passed the ball once in the second half, and it shocked Shumpert when he did.

Of course, Anthony’s shooting has been offset by Pierce’s struggles. Pierce has two turnovers already as the Celtics have struggled to score — zero points in more than three minutes, to be exact.

Halftime, Celtics 53-49: One of the more amazing developments of this season is Bass’ transformation into a trusted defender. A few weeks ago, Rivers lauded Bass for becoming a communicative defender, and now Bass spent the latter part of the second quarter matched up with Anthony. He forced Anthony into some tough misses and even a fumbled ball to a turnover, which led to a Pierce layup.

Green, on the other hand, is carrying the Celtics on offense. He leads everybody with 20 points on just 10 shots, pushing the issue and attacking the basket against Knicks defenders who are either too small or too slow. Pierce is playing his usual do-everything role with 10 points and six assists.

Second quarter, 4:01, Celtics 46-44: Somebody might want to tell the Knicks this is a close game they are now losing.

The Celtics can use every bit of offense offered by someone other than Green, who is now up to 17 points. He is doing exactly what a lot of people doubted he could do with Garnett and Pierce on the floor: dominating.

Second quarter, 8:54, Knicks 37-34: Green has taken over this game for the Celtics, and they need every bit of what he is giving them. The Knicks are back in the lead thanks to a couple of big threes by Jason Kidd, who has proven invaluable as a calming influence for the helter-skelter Knicks.

Green is up to 13 points, tying Anthony for the game’s high, but he is doing it much more efficiently. Green has his 13 points on seven shots — one of which was a fallaway 26-footer with Kidd’s hand in his face as the shot clock expired — plus two blocked shots.

End of first quarter, Celtics 29-26: For all the New York fans’ yelling and jumping, their team was never going to shoot at roughly a 70-percent clip all game. As soon as the Knicks cooled off a bit, the Celtics came storming back, taking the lead on a three by Green at the buzzer.

Green has looked extremely confident since his shaky start, and Bass has been strong, too. Green shot 3-for-5 in the first quarter, and on one of those misses — a blocked layup on the break — Bass was there to score on the rebound.

Anthony was on fire and leads all scorers with 13 points, but he has missed six of seven shots since his 4-for-4 start. And Pierce is already giving New York his all-around best, posting eight points, three assists and two rebounds.

First quarter, 2:23, Knicks 24-21: Anthony finally missed a couple of shots, which means Celtics coach Doc Rivers does not need the officials to investigate whether Anthony is using GameGenie. When J.R. Smith hopped off the bench and hit his first two shots, though, the problems just kept coming for Boston.

Things could get mighty interesting here. Bradley was forced to go to the bench with his second foul, and Rivers apparently chose offense over defense by inserting Crawford over Courtney Lee. With Crawford and Smith on the court together, this could get wild.

Maybe it already has. Garnett and Chandler were jostling down low when Chandler was hit with a foul, plus a technical foul for giving Garnett and extra love tap afterward.

First quarter, 7:46, Knicks 12-6: Led by Garnett, the Celtics are actually off to a fairly hot start on offense. The problem is, Anthony is just hotter.

The teams have combined to shoot 8-for-13 from the field, with Garnett canning his first two shots. But Anthony is a blistering 4-for-4 with two 3-pointers to help the Knicks double up the Celtics early.

While Garnett, Pierce and Bradley look sharp, Green looks a little uneasy. Maybe he underestimated just how much the intensity would be amped up for a playoff game at The Other Garden.

2:28 p.m.: The presence of some increased security and a reflective moment prior to the game will not be the only indication this is a different sort of day. The Celtics will wear “Boston Stands as One” patches on their jerseys, adding to the symbols of unity shown by all three Boston teams playing on Saturday.

As for, you know, the actual game, the projected starters are listed below.

2:03 p.m.: Rajon Rondo is in the building. The Celtics point guard, who has not played since January but seems to be progressing well in his rehab from ACL surgery, has reportedly arrived at Madison Square Garden to cheer on his teammates.

Rondo’s support surely is appreciated, but far from necessary. Much of America is likely to be pulling for Boston in this series.

8 a.m. ET: An excruciatingly long week has finally reached the weekend. Boston and its immediate suburbs are still reeling from Friday’s lockdown and manhunt, but now Celtics fans can turn their attention to a much more frivolous type of must-see TV.

With the surreal environment back home finally starting to dissipate, the Celtics open what they hope will be a long playoff run with Game 1 of their Eastern Conference playoff series against the Knicks. Kevin Garnett, Paul Pierce, Jason Terry and the rest are all expected back in action for just the team’s second game in seven days. It remains to be seen just what awaits the Celtics.

The Knicks won the regular season series 3-1, but two of those games were played without Garnett. (Keep in mind that the Celtics’ lone win, Jan. 7 in New York, was played while Rajon Rondo was suspended.)

Join us for updates and analysis during the game, which tips off at 3 p.m. 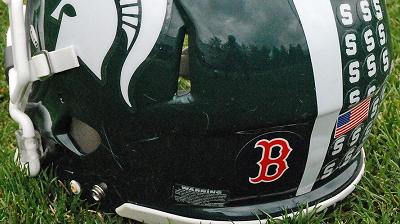