David Ortiz Says F-Word During Speech ‘Just Came Out,’ Feels Like Boston Should Be Pumped - NESN.com Skip to content David Ortiz delivered a heartfelt message to the fans at Fenway Park on Saturday, but it wasn?t exactly rated PG.

Ortiz, speaking about the week?s events, proclaimed, ?This is our [expletive] city.?

The message drew a huge ovation from the crowd, as Ortiz seemed to put into words exactly how many Bostonians have felt this past week in the wake of Monday?s Boston Marathon tragedy. It?s not every day you see an athlete suddenly drop the F-word when addressing 35,000 fans, though.

According to Ortiz, the vulgarity wasn?t pre-planned.

?It just came out,? Ortiz said after the game. ?If I offended anybody, I apologize, but I feel like this town needs to be pumped.?

The fans at Saturday?s game certainly were pumped, and they were even more pumped when Daniel Nava launched a three-run home run in the eighth inning to help lead the Red Sox to victory. Regardless of the outcome, though, it was obvious this game meant a lot to everyone in the ballpark.

?This past week man, I don?t think there was one human being who wasn?t affected by what we got going on down here,? Ortiz said. ?This past week, I was very emotional, very angry about the whole situation. I had to get that out of my chest and just make sure that our fans and everybody in the nation knows that this is a great nation, and part of it was how everybody supported each other when this thing went down. I?m happy to be a part of this nation.?

Well put, Papi. Isn?t it great to have him back?

Shane Victorino Exits Game With Back Tightness, Will Be Reevaluated on Sunday 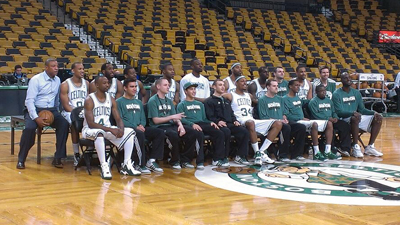 Celtics Will Provide $200,000 for Marathon Victims, Wear ‘Boston Stands As One’ Warm-ups in Game One