When Derek Jeter broke his ankle in the ALCS against the Tigers in October, it was on an innocuous play. He was ranging for a ground ball, as he had so many times before. Suddenly, though, his ankle gave way, and his leg crumpled beneath him.

When Kevin Ware broke his leg in the regional final against Duke on Sunday, it was on an innocuous play. He was jumping to block a shot, as he had so many times before. Suddenly, though, the lower half of his leg gave way, and the bone snapped through his skin.

The key factor in Jeter’s injury — a repeated weakening of the bone that eventually led to it breaking under less-than-stressful circumstances — could be the same reason Ware went down.

Ware’s leg injury “was a freak accident that may have been exacerbated by previously undetected stress fractures,” Liz Neporent of ABC News reports. While players rarely break a bone, much less turn an ankle, on such a play, previous, smaller injuries could have led to Ware’s leg finally giving out.

“He came down hard, landing in an awkward way,” Dr. Robert Glatter of Lenox Hill Hospital in New York told Neporent. “That, combined with an underlying bone issue or an existing stress fracture, predisposes someone to this type of injury.”

Ohio State University’s director of sports medicine research, Tim Hewett, agreed that the injury appeared to be a fluke.

“Watching the video tape over and over, I would not expect this type of fracture to occur,” he said. “I suspect he had some risk factors that created some sort of bone deficit.”

Ware had surgery Sunday night and has had a rod put in his leg to stabilize it as he heals. He was in good spirits Monday, talking about getting back to basketball. 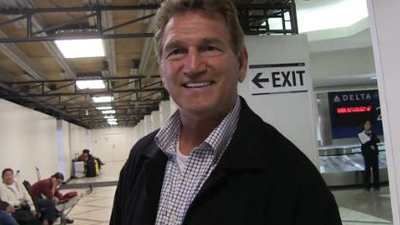