Opposing players must really hate the walls at Oracle Arena.

Much like the oil cans stacked behind Steve Martin in The Jerk, the walls at the arena in Oakland have suffered some incidental damages over the years as a result of the pesky Warriors. First, there was Dirk Nowitzki opening up a gash with a trash can after the Dubs upset the top-seeded Mavericks in the 2007 playoffs. Now, Nuggets forward Kenneth Faried has added a second hole with his swift kick to the wall after the Warriors won Game 4 on Sunday to move into a 3-1 lead in the best-of-seven series.

Faried’s angry kick left a Manimal-sized opening in the wall of the visitor’s locker room at Oracle. The immensely competitive second-year player out of Morehead State admitted to his frustration after the Nuggets lost their third straight game in the series after earning a close win in Game 1, tweeting out an annoyed “SMFH” afterward.

Before maintenance workers rush to patch up that hole, the Warriors may want to keep it as a permanent souvenir. That was what they did with Nowitzki’s little piece of vandalism, which the good-natured Nowitzki has autographed.

Check out the results of Faried’s kick in the photo below, courtesy of Benjamin Hochman of The Denver Post. 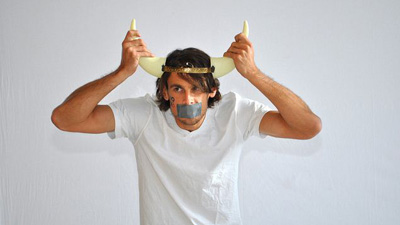