Quinton Patton might be the most complete receiver in this year’s draft class, at least according to fellow draftee and Mississippi State cornerback Johnthan Banks.

After getting lit up for 11 catches, 87 yards and a touchdown against Patton in 2011, Banks was quoted as saying that Patton was even better than any SEC receiver.

“I feel like (Patton) from Louisiana Tech is the best receiver I’ve played against since I’ve been here, Banks said. “I’ve gone against some good ones in the SEC, too, but he’s probably the most complete.”

Patton had an incredible two-year run at Louisiana Tech, becoming one of the best receivers in school history and, in turn, the country. His smaller stature and under the radar productivity is reminiscent of Deion Branch ahead of the 2002 draft.

Branch is a few inches shorter than Patton, sure, but both were just as productive as some of the elite receivers, yet undervalued and not given the same credence.

The Patriots obviously love Branch’s energy, effort and quickness, and they could see similarities with Patton. If so, don’t be surprised if Bill Belichick tries to lock him down as the Patriots’ future on the outside.

Editor’s Note: NESN.com will evaluate and analyze one potential Patriots draft prospect every day from March 27 up until the start of the NFL Draft on April 25. Patton is the 17th player in that series.

Patton played his first two seasons at a community college, where he was very productive and earned a scholarship from Louisiana Tech. Both of his seasons at the D-I level were extremely productive, too. He caught 79 passes for over 1,200 yards and 11 touchdowns in his first season, only to follow it up with 104 grabs for nearly 1,400 yards and 13 scores last season.

Patton is as reliable a receiver as there is and he should be able to come in and produce on the outside almost from the start. He’s a talented receiver and has enough speed to break the top off of defenses consistently. If he ended up with the Patriots, he would make for a very good third or fourth option.

Almost certain. Patton is a highly touted prospect, but his value likely lies more in the mid-second or early-third round than in the first. Teams like the Rams (22nd overall), Vikings (23rd and 25th) and Texans (27th) are all looking for wide receivers, but Patton probably will not be their target so early in the draft.

Strengths: Patton’s speed is his biggest asset and his first step off the line can leave defenders in trouble. He accelerates in space very well and can break big gains off if he catches the ball freely. He’s a natural hands catcher and often picks the ball out of the air. He also dropped just one pass on 158 targets last season.

Weaknesses:  He seemed overmatched at times when facing press coverage and could have trouble with physical corners at the pro level. He could also improve his precision when running certain routes.

Scout Patton for yourself below. 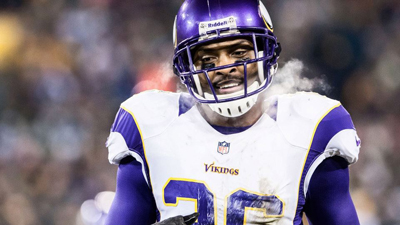