In three seasons with the Mountaineers, Bailey developed into one of the best pure receivers in the nation. His skills as a pass catcher blossomed along with his stats, becoming arguably the most productive receiver in the NCAA last season.

His long and successful relationship with high school teammate and West Virginia quarterback Geno Smith likely helped his breakout, but Bailey has evolved into much more than just one of Smith’s toys.

Bailey is a very smart, reliable receiver with a penchant for finding the end zone. He was as consistent as any receiver in college football, catching better than 77 percent of his targets and scoring seven more touchdowns (25) than the next best receiver last season (DeAndre Hopkins, 18).

The Patriots are in need of some additional receiving threats after losing their two most productive receivers in Brandon Lloyd and Wes Welker this offseason. Danny Amendola, Donald Jones and now Michael Jenkins should help fill the void in the interim, but adding a versatile receiver like Bailey to that mix would really solidify that group.

Oh yeah, and remember how the Patriots missed out on Greg Jennings back in 2006? Well, Bailey’s best NFL comparison might be to the new Minnesota Vikings receiver and the Patriots aren’t ones to make the same mistake twice. So, this might be a more likely scenario than some may think.

Editor’s Note: NESN.com will evaluate and analyze one potential Patriots draft prospect every day from March 27 up until the start of the NFL Draft on April 25. Bailey is the seventh player in that series.

No receiver in college football was more productive than Bailey last season. Sure Terrance Williams put up gaudy numbers at Baylor, but even he couldn’t outdo Bailey. In 2012, Bailey proved himself as Geno Smith’s favorite target, finishing second in the nation with 114 catches, third in the nation with 1,622 yards and led the NCAA with 25 touchdown grabs — just two short of Troy Edwards‘ all-time NCAA division-1 record.

Bailey is as seasoned a wide receiver as the Patriots will find in this year’s draft class. He already has extensive experience in the spread offense and works the sidelines better than any receiver currently on their roster. His versatility makes him dangerous as he’s capable of playing in the slot and on the outside, and he should be able to come in and compete for a starting role almost immediately.

There is a much better chance that Bailey’s around at No. 29 than fellow Mountaineer Tavon Austin, that’s for sure. While Austin is thought to be off the board in the top 20, Bailey hasn’t gotten too much first-round hype. Bailey had a good but not great combine and, while his stats are impressive, teams are worried about his durability and ability to transition from the spread offense he played in at West Virginia. He should be available at the end of the first and might even find his way to the Patriots at No. 59 in the second round.

Strengths: Bailey has very reliable hands and is great at finding space in the open field. He works well along the sideline and is adept at adjusting to throws on the fly. He also excels as a blocker, relay keeping his man in front of him and maintaining an explosive push away from the play’s direction.

Weaknesses: His speed isn’t overwhelming and doesn’t possess the shiftiness of other smaller receivers. He lacks ideal size for primarily an outside receiver and benefitted from defenses focusing on teammate Tavon Austin.

Scout Bailey for yourself below. 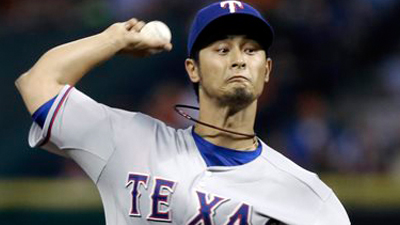 Yu Darvish Has Bid for Perfect Game Snapped With Two Outs in Ninth Inning, Strikes Out 14