Wade Boggs wants the Red Sox to forget that he left Boston for greener pastures in New York.

The Hall of Fame third baseman says he wants the Red Sox to retire his No. 26. Boggs hit .338 with 85 home runs and an .890 OPS in his 11 years in Boston. He played five more years for the Yankees and two to close out his career with the then-Devil Rays.

?It would be nice,? Boggs told The Boston Globe. ?Am I bitter? I thought when I wore a Boston hat in the Hall of Fame I?d be up there.

?It?s been eight years now. I used to be bitter. But I think those days are over. Was I bitter? Absolutely.?

On the Red Sox’ website, the criteria for retiring numbers is “Election to the National Baseball Hall of Fame” and “at least 10 years played with the Red Sox.” It seems as though Boggs would be a shoo-in, but “Chicken Man” was told he would have had to end his career with the Red Sox.

Boggs’ No. 26 was handed out the year after he left to a nonroster player by former general manager Lou Gorman, according to the third baseman. The last two players to wear the number were Scott Podsednik in 2012 and Brock Holt during spring training this year.

Boggs pointed out that no one has been given Roger Clemens‘ No. 21 since he left. Clemens played 13 years in Boston before leaving for Toronto. Both players have attempted to mend relationships with the Red Sox and their fans in recent years. 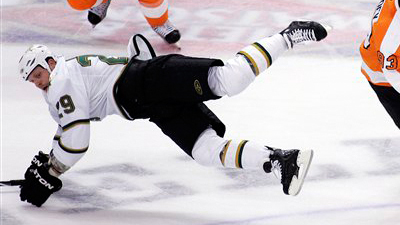