Adrian Peterson 'Not With' Gay Marriage Despite Having Gay Relatives (Audio) - NESN.com Skip to content Sunday night marked a milestone for gay rights, as Robbie Rogers made his debut with the L.A. Galaxy, becoming the first recognized openly gay athlete in a major American sport. Earlier in the day, however, Minnesota Vikings star Adrian Peterson reminded everyone that tolerance is not necessarily the same thing as acceptance.

Speaking to Bruce Murray and Amani Toomer on Sirius/XM NFL Radio, Peterson made it clear that he is not a proponent of gay marriage. Peterson said he has gay family members and is tolerant of gay people, but he doesn’t condone gay marriage.

“To each his own,” Peterson said. “I?m not with it. But I have relatives that are gay. I?m not biased towards them. I still treat them the same. I love ’em. But again, I?m not with that. That?s not something I believe in. But to each his own.”

Peterson’s comments came out of a discussion about former Vikings teammate Chris Kluwe, an outspoken advocate for gay marriage.

Check out audio of the interview below, with Peterson’s comments about 13 minutes in. 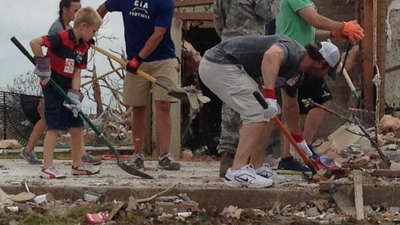 Report: Paul Pierce ‘Likely’ to Be Bought Out by Celtics, Go to Another Contender