Athletics utility guy Adam Rosales is known for his home run trot — rather than the slow jog of most players, he sprints all 360 feet around the bases. Rosales didn’t get that chance during the ninth inning of Oakland’s Wednesday game against the Indians, hitting a ball that appeared to be off the wall and parking himself happily on second base.

Except that on second look, Rosales’ supposed double appeared to actually be a home run.

A’s manager Bob Melvin immediately came out to argue the call, and to their credit, the umpiring team did go to review the replay. According to replays available to television audiences, the ball clearly hits a railing well above the yellow line on top of the left field wall. However, crew chief Angel Hernandez and the rest of the crew apparently didn’t see it that way, upholding the on-field call of a double.

Not only did the blown call come with Oakland down 4-3, but what’s worse is that Hernandez didn’t seem to care to be accountable for the blown call. After the game he refused to let reporters electronically record is comments, saying that they were only allowed to take notes by hand.

“It was not evident on the TV we had that it was a home run,” said Hernandez, according to the San Francisco Chronicle’s Susan Slusser. “I don?t know what kind of replay you had, but you can?t reverse a call unless there?s 100 percent evidence.”

Hernandez has long been viewed as one of the worst umpires in Major League Baseball. Texas Rangers manager Ron Washington once said of Hernandez “Angel is just bad. That’s all there is to it.”

Check out the video below and judge for yourself. 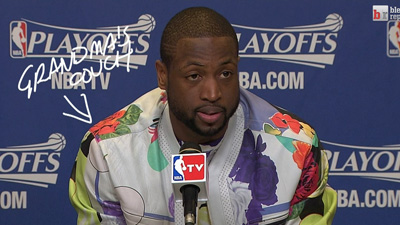