While seemingly everyone else praised Clay Buchholz for another job well done on Wednesday, Toronto broadcaster Dirk Hayhurst focused on what he claimed to be an instance of doctoring the baseball.

Hayhurst, a former pitcher who now works for Rogers SportsNet, sent out a series of tweets in which he accused Buchholz of using a substance to manipulate the baseball during Wednesday’s start against the Blue Jays. Hayhurst claimed that the substance was located on Buchholz’s left forearm.

Buchholz denied any wrongdoing prior to Thursday’s game at the Rogers Centre. He told MassLive.com that the only substance located on his arm was rosin.

“There’s a rosin bag behind the mound and it’s there for everybody to use every inning after our warmup,” Buchholz reportedly said. “Put rosin on my arm throughout the game. Sweat, water, whatever. … Sometimes I put a little thing of water on my hip just to get moisture on your hands, because sometimes the balls that they throw to you feel like cue balls off a pool table. Got to find a way to get grip. But yeah, I mean, definitely no foreign objects or substances on my arm.”

Buchholz tossed seven shutout innings against the Jays on Wednesday. He gave up two hits and struck out eight in what was really just a continuation of the momentum he built up over his first five starts. Buchholz was named American League Pitcher of the Month for April on Thursday, and he’s a big reason the Red Sox are enjoying a ton of early-season success.

Buchholz wonders whether such accusations would have been made if he wasn’t on such a roll.

“That’s the way the world works,” Buchholz reportedly said. “If I had thrown two innings last night it probably would have been an issue. As far as the undershirts and the discoloration, I’ve been wearing the same shirts for the last three years. So go figure what’s all over these shirts, I don’t even know. Throw ?em in the wash every night after I take ?em off and that’s it.

“I’m throwing stuff in my hair too, right? No, that’s water. You can look at as much video as you want. After every inning, I go in there and pour a bottle of water on my head.”

No one on the Blue Jays appeared to complain on Wednesday, so perhaps this is an instance of one man’s sour grapes. Whatever the case, Hayhurst sure knows how to ruffle feathers. 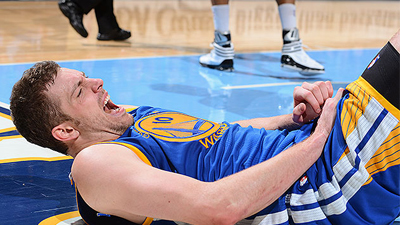