To most people, former Russian dictator Joseph Stalin is remembered as a man responsible for the deaths of 20 million, a brutal figure who saw no need for human rights. To Philadelphia Flyers goaltender Ilya Bryzgalov however, there’s a “logic” to the plans of the man who instigated several “purges.”

Suffice it to say, Bryzgalov is a weird guy, and he appeared to be going further off the ledge by the day late in the NHL season. Beyond bizarre behavior such as trying out as a cosmonaut and giving his odd thoughts on the Russian meteor, more recently Bryzgalov has gone after the Philadelphia media. He recently called the Philly hockey media corps “lunatics” after the season ended, and said that he’d rather watch Star Wars than playoff hockey.

Most unforgivable of all, Bryzgalov said that he prefers the Star Wars prequels to the original trilogy.

Now, however, Bryzgalov may have gone from, at best, lovable lunatic and entered Ozzie Guillen territory. He recently gave an interview to the Russian sports outlet Championat, and professed his admiration for Stalin.

“I see logic in his action,” Bryzgalov said, according to a translation by Yahoo!’s Dmitry Chesnokov. “Not without going too far, of course. But he came to power in a country that had just lived through a revolution. There were so many spies, enemies, traitors there. A lot of people still had guns after the civil war. The country was in ruins, [people] needed to survive somehow. The country needed to be rebuilt, and in order to do that it needed to be held in iron hands.

“… He knew what he was doing. He is described as a ‘bloody tyrant.’ But at the time it couldn’t be any other way. Yes, there were innocent people who were victims of repression. But it happens.”

So, there you have it. The deaths of 20 million people “happens.” 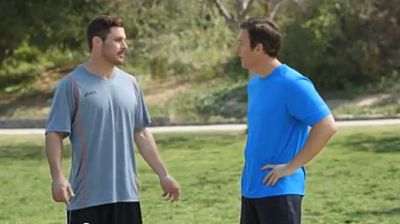