Jonathan Papelbon Discusses Fenway Return, Says Boos Are 'How They Love You in This City' (Video) - NESN.com Skip to content

Red Sox fans didn’t show Jonathan Papelbon much affection when he sprinted in from the visitors’ bullpen at Fenway Park on Tuesday. Papelbon apparently felt the love, though.

“That?s how they love you in this city, man. That?s just how it is,” said Papelbon, who was booed when entering the game in the ninth inning. ?I feel like the first time I got booed at Yankee Stadium, I was like, ?Yes, I?ve made it!? Man, it?s the atmosphere of the city — like I said, I?ve always enjoyed playing in this city and pitching off that mound. It really felt like old times — it really did — when I was out there, just the visuals that you get out there pitching out on that mound, it felt like old times, just in a different uniform.”

Papelbon spent seven seasons in Boston, saving a franchise-record 219 games and helping the Red Sox win a World Series title in 2007. Sox fans will always appreciate his contributions, but the situation with Papelbon is a very interesting one.

Papelbon has continued pitching well in Philadelphia since signing with the Phillies as a free agent prior to the 2012 season, while the Red Sox’ closer role has been somewhat of a revolving door. Throw in that Papelbon has always been a rather outspoken guy, and the stars were aligned for a boisterous reception.

The right-hander said that he was more focused on the task at hand — closing out a 3-1 Phillies win — while warming up in the Fenway Park bullpen than he was on his days as a member of the Red Sox, though.

?I really wasn?t thinking about it,? Papelbon said. ?I was just taking it like I normally would any other game, whether we were playing the Red Sox or the Marlins or anybody else. I was just going about my routine and doing what I know how to do to prepare to get ready to pitch in a big league ball game. That was it.?

Papelbon retired Jonny Gomes, Dustin Pedroia and David Ortiz in order in the ninth inning. Pedroia and Ortiz, of course, were members of the Red Sox’ 2007 World Series-winning squad, and they both remain close friends of Papelbon’s, which obviously made for a couple of interesting showdowns.

?I loved it,? Papelbon said. ?I loved the fact that I had to kind of, you know, self-talk to Cinco in there. His ego was getting in the way a little bit there. Probably went inside to Ortiz one too many times maybe. That was his ego getting in the way. That?s just what I have to deal with. That?s just kind of how it is, man. ? I would say it was more fun than strange. It?s like playing against your brother in the backyard. For me, those guys are some of my best friends in the world. But at the same time, it was fun. They have a really good lineup over there, so I had to really stay focused on the task at hand, because I knew at any given moment the game could be tied up or be close.?

The Red Sox’ offense struggling against Cliff Lee earlier in the evening probably had the Fenway Faithful on edge a little bit more than usual, but it’s clear Papelbon’s name still evokes a response in Boston.

Check out more of Papelbon’s postgame comments in the video below. 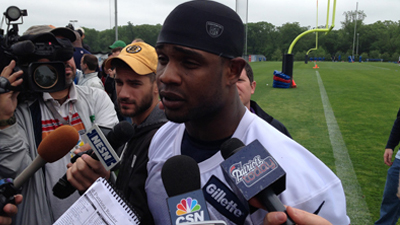