LeBron James Could Be NFL Quarterback After NBA Career, According to Joe Theismann, Who Needs Job - NESN.com Skip to content LeBron James could be the next great two-sport star, according to Joe Theismann.

James wouldn’t be playing in the NFL and NBA at the same time, though. Theismann thinks James could start up an NFL career after he’s done in the NBA. And Theismann wants to be involved — because he needs a job.

“I would love to work him out and also serve as his agent,” Theismann told FOX Sports Florida. “I’ll go wherever he wants this summer. He could play another four years in the NBA before seriously trying the NFL. … There are not a lot of 38- or 39-year-old basketball players, but there are 38- and 39-year-old quarterbacks, so there’s always time for him.”

The topic came up because James said he could have been an NFL quarterback when asked after he completed a long pass to Dwyane Wade in Game 1 of the Eastern Conference semifinals. James cited his study habits and ability to read defenses.

Theismann seems pretty serious about this fantasy of teaching James how to play quarterback. He has plenty of time on his hands, too.

“I need a job,” Theismann said. “The first thing I would do is teach him the snap. Then I’d take him through drop backs, quick hitches, throwing the deep ball. Wouldn’t that be a great piece of footage to see, LeBron throwing the football? Whether he could play quarterback, that’s one of the great ifs in sports.”

James played quarterback as a freshman in high school, then switched over to wide receiver, where he was dominant for St. Vincent-St. Mary High School. The Heat forward caught 57 passes for 1,160 yards and 16 touchdowns as a junior before giving up the sport.

Watch your back, Brandon Weeden — LeBron may be coming to take your spot on the Browns. 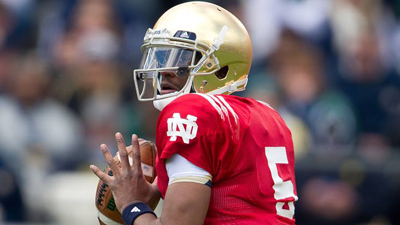