The NFL is a league based on patterns and trends. Coaches, players and front-office personnel are constantly studying the successes of certain teams to try and create their own blueprint.

The Patriots always seem to be one of those test cases. First, it was the aggressive press coverage of their cornerbacks, which forced the league to more strictly enforce the five-yard illegal contact rule. Soon after came the versatile passing game based around receiver Wes Welker, and then, of course, the fast-paced approach that yielded a near NFL record 74.4 offensive snaps per game in 2012.

This offseason, most of the attention seems focused on the read-option offense that hit the NFL last season. But, even with that fad taking center stage, some teams continue to use the Patriots as the framework of their rebuilding plan.

This time it’s the Patriots tight ends that are being mimicked, as teams look to find their own Aaron Hernandez and Rob Gronkowski clones.

Gronk’s pure power and red zone prowess combined with Hernandez’s quickness and versatility make them a dangerous assignment for any defense. The proof is right there in the statistics, too, as the two tight ends have been the focal point of the Patriots’ offense over the past three seasons, catching 35 percent (398 total) of Tom Brady‘s completions, accounting for 32 percent of the team’s receiving yards (4,519) and 51 percent of their passing touchdowns (56).

Other teams noticed the advantage of having two dominant tight ends and decided to adopt the same philosophy.

The Ravens took the same approach as the Patriots in 2010, drafting Dennis Pitta and Ed Dickson similarly in the third and fourth rounds, respectively. But even as they continue to emerge, it’s still Gronk and Hernandez that other teams attempt to emulate.

The 49ers created their own pseudo version of the Patriots’ tight end attack over the past few seasons with Vernon Davis and Delanie Walker. The duo didn’t quite live up to the Patriots’ production, but they provided a sound basis for the 49ers’ offense all the way to within moments of a Super Bowl victory. Walker got big money from the Tennessee Titans this offseason, but Jim Harbaugh didn’t waste any time replacing him, taking Rice tight end Vance McDonald midway through the second round (55th overall) of this year’s draft.

The Eagles took Zach Ertz early in the second round, too, and there is a chance he’ll serve in a two-tight end set, but it’s more likely that he will be more of a replacement than a complement for Brent Celek.

Others teams around the league still haven’t embraced the two-tight end concept, but the movement is gaining traction. With the 49ers, Bengals and Cowboys all following the Patriots’ framework, it appears that tight end fever is quickly becoming a league-wide epidemic.

Now, the Patriots just hope their own tight ends can avoid the injury trends and get back to setting them. 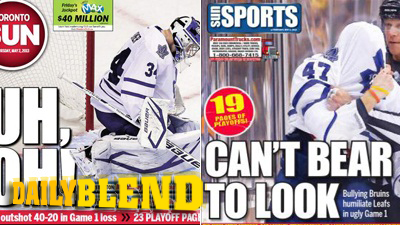