Roberto Mancini lifted the Premier League trophy on May 13, 2012. Who knew that triumphant gesture would mark the beginning of his own annus horribilis?

Mancini was fired as Manchester City’s manager on Monday, exactly one year after ending the club’s 44-year quest for domestic supremacy. He departs after three-and-a-half years, two major trophies and one long-running saga about his job security.

“Despite everyone’s best efforts, the club has failed to achieve any of its stated targets this year, with the exception of qualification for next season’s UEFA Champions League,” a club statement said.

“This, combined with an identified need to develop a holistic approach to all aspects of football at the club, has meant that the decision has been taken to find a new manager for the 2013-14 season and beyond.”

Two words in City’s statement, “failed” and “holistic,” are more important than all others, for they sum up Mancini’s exciting, yet turbulent, reign at the Etihad Stadium.

Overall, Mancini was no failure as City’s manager. Winning the Premier League and FA Cup ensures that label can’t stick. The tangible success City achieved on his watch ended generations of fans’ suffering, and his reputation remains intact in England, Italy and beyond. He won’t see out the last four years of his £7.5 million-a-year [$11.5. million] contract, but he’ll begin his job search with a pocket stuffed with one year’s salary severance pay. Napoli, AS Roma, Inter Milan, AC Milan, PSG, AS Monaco and Chelsea are just a few of the clubs that are reportedly interested in hiring him. Others will emerge in the coming weeks.

But Mancini’s time at City wasn’t exactly successful either. He joined the world’s richest club in December 2009, spent close to £300 million ($458 million) assembling his squad, won and lost leagues and cups and couldn’t advance past the group stage of the UEFA Champions League … before he lost his job.

The real failure is that the 2012-13 campaign will go down as a missed opportunity for both Mancini and City. They stunned Manchester United and other domestic rivals by winning the league last season. Had they built on that success and progressed on the field, all the talk would be about City’s looming era of domination and its bright future under Mancini. Instead, both club and manager must assess what happened, reset themselves and put things right next season.

City’s stalled for a number of reasons, many of which concern the second keyword: “holistic.” There was a fundamental disconnect between how Mancini behaved and how he should have behaved in these unique times and circumstances.

Mancini’s job was under threat as late as April 2012 when it looked like United would win the league. United collapsed, City surged to victory and Mancini was rewarded with a lucrative, five-year contract extension. Normally, this would have strengthened his position, as the new deal represented the full support of owner Sheikh Mansour and chairman Khaldoon Al-Mubarak.

But everything changed — first in August when Ferran Soriano was hired as City’s new CEO, then in October when Soriano recruited another former Barcelona administrator, Txiki Begiristain, as director of football. The club started moving forward and Mancini wasn’t the one driving. He acted like he was, and that won him few friends when (and where) it counted.

Mancini’s man-management shortcomings saw him clash with star players — including captain Vincent Kompany and goalkeeper Joe Hart — both publicly and privately. He repeatedly blamed City’s failure to strengthen in the summer transfer market, particularly its fizzled pursuit of Robin van Persie, as the main reason for its weak title defense (doing so both in public and in private).

Mancini’s inability (or unwillingness) to strengthen ties between City’s youth and senior teams is another oft-cited reason for his dismissal. The same can be said about his personal relationships with senior officials, especially youth director Brian Marwood in addition to Soriano and Begiristain.

By most accounts Mancini was aloof and abrasive with players and bosses inside the walls of the club, while he came across as combative and domineering when discussing them in public. Could he still train players, prepare for opponents and manage egos in the dressing room? Yes, but his attempts at exerting total control at the very time when he lost itleft him isolated, an island unto himself. Mancini either would not or could not adapt to changing circumstances. Players and bosses saw this months ago. It was made clear to the public Monday.

Some say Mancini’s firing was too harsh or ruthless and that he should have been given another year on the job. City was out of the Champions League in December, Mario Balotelli (Mancini’s troubled but talented “son”) was sold to Milan in January and United all but wrapped up the league title by late February. City bosses would have been well within their rights to fire him two months ago. They might have looked better had they done so before news of their courtship of Manuel Pellegrini turned Mancini into an object of sympathy. Mancini’s clandestine 2009 arrival creates a strange symmetry to the whole affair.

The end of Mancini’s era is holistic failure on his and the club’s part. There’s a thin line between success and failure at the elite level of the game, and Mancini’s final season shows what can (and often does) happen when all members of an institution aren’t pulling in the same direction. City finished second in the league, runner up in the FA Cup — a record which fails to meet the demands of the club’s 10-year plan.  Blame the owners. Blame Soriano, Begiristain and Marwood. Blame Kompany, Hart and the other players. Certainly blame Mancini. For years, City has had a reputation as a bit of a madhouse. The estimated $1 billion Mansour has poured into the club since 2008 hasn’t really changed that perception, and that is one expensive and holistic failure in itself. 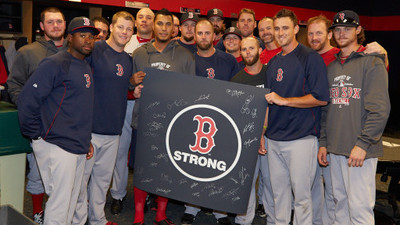 Red Sox Raffling Off ‘Boston Strong’ Poster, Custom Bat Signed by Entire Team to Raise Money for The One Fund 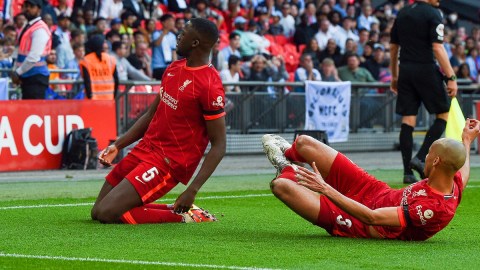