Susannah Collins Fired by CSN Chicago, But Network Says It's Not for 'Tremendous Amount of Sex' Gaffe (Video) - NESN.com Skip to content It’s been quite a few weeks for on-air reporter gaffes. First there was A.J. Clemente, and, just on Tuesday, CSN Chicago’s Susannah Collins told her audience that the Blackhawks have had “a tremendous amount of sex” this season.

Clemente was fired for his slightly more vulgar misstep, and now Collins has been dismissed from her network, too. According to the Chicago Tribune, Collins was no longer with CSN Chicago as of Thursday night.

But here’s the weird thing: It reportedly has nothing to do with Tuesday’s mishap, itself.

“Due to circumstances unrelated to her on-air remarks Tuesday night, Susannah Collins and Comcast SportsNet Chicago have parted ways,” said CSN Chicago vice president and general manager Phil Bedella in a statement. “We appreciate everything Susannah has contributed to our network over the past year and wish her the best in her future endeavors.”

The “circumstances unrelated” referred to in the statement appear to be videos on YouTube Collins did as a co-host of Sport Nutz, a 16-part series with a lowbrow take on sports news. Collins’ Tuesday gaffe purportedly brought new attention to those videos, which became the impetus for her dismissal.

Sports Nutz features sexually explicit material and some possibly racially offensive humor. However, as Deadspin points out, Collins hadn’t necessarily tried to hide her involvement with Sports Nutz, meaning either CSN Chicago didn’t do it’s due diligence when it hired Collins back in September, or the firing actually has more to do with the “sex” gaffe.

Click here for a video of the original misstep >> 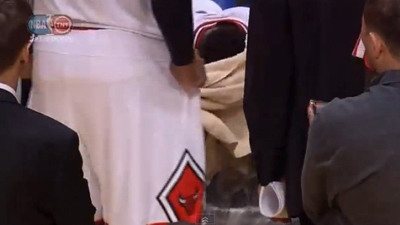