If opposing offensive linemen weren’t already intimidated by the three-time Pro Bowler, they may be now. Dockett unveiled his new facemask model, named the “Freight Train,” at the Arizona Cardinals’ FanFest at University of Phoenix Stadium on Tuesday night.

The facemask model, made by Bad-Ass Masks, according to Yahoo!, looks part-bug, part-Bane from The Dark Knight and part-freight train. It has 18 diagonal bars, six horizontal bars and one vertical bar down the middle. All of that, topped with a rainbow visor, makes for a very unique look.

To complete the Bane look, Dockett should begin every game telling opposing guards and tackles, “Now’s not the time for fear. That comes later.”

Check out Dockett’s new look in the photo below. 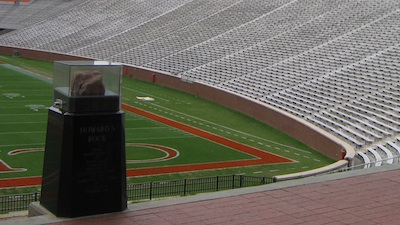 Brendan Rodgers Says Liverpool Will Compete for FA, Capital One Cups With Deeper Squad in 2013-14