No, he’s not bumping Run-D.M.C. from the speakers of his car or rocking big gold chains like L.L. Cool J did back in the ’80’s — at least not as far as we can see —  but when he gets out on the football field, he’s got that old-school feel.

Blount even described himself as such after Patriots OTAs earlier this week, saying “let’s just say downhill, physical running back — kind of old school.”

The 26-year-old is one of the bigger backs in the NFL, and at 6-feet and 247 pounds looks more like a fullback than a feature back. In fact, he’s the biggest running back the Patriots have had on their roster in nearly a decade, if not longer, which has running backs coach Ivan Fears reminiscing.

Fears has been with the Patriots since 1999, when he worked with the wide receivers, and has been coaching the running backs since the 2001 season — a memorable one in Patriots history. He’s an old-school guy, and he’s dealt with his fair share of big, old school backs over the years, including a few of note.

Dillon and Smith brought size and power to the Patriots’ backfield, and, just from the way he spoke about them, Fears loved coaching them. But Blount is an entirely different breed of big. His height and build make him look more like a tight end or linebacker than a running back, and standing near him in a media scrum can make even the biggest reporter feel like an ant in comparison.

Blount knows that his strength lies in his physical prowess. He’s not one of these smaller speedsters like Shane Vereen or Leon Washington. He matches up much better with the likes of Stevan Ridley or even Steven Jackson — big, burly power backs with the ability to either run through or around a defender.

“I’m just a big, physical running back,” Blount admitted with some sense of pride. “Me being the size that I am is good for me and the style I use to run the football.”

His style is set, and there’s no disputing it — this run says it all. But that hasn’t been the issue with him over the years. So, how about his character?

Blount was kicked off the Oregon football team his senior year after throwing this now infamous punch at the end of the 2009 season opener. He was also slapped with the “trouble” tag during his lone season under Bill Belichick confidant Greg Schiano in 2012, which likely led to his almost non-existent trade value this offseason.

Per the trade, Blount has remained tight-lipped since coming to the Patriots, but a little question dodging at OTAs sure made it seem like he requested it. That uncertainty isn’t an issue for the Patriots, and neither is his attitude thus far.

“I love him in the meetings, I love being around him,” Fears said. “So, we’ll see what he does when it counts. That’s when you’re really gonna love the guy, when he gets out on the field and makes some things happen.”

Good behavior will help Blount in his quest to make the final roster, but, even as a former 1,000-yard back (2010), nothing is guaranteed — a feeling he knows quite well.

In a group that includes the NFL’s seventh-leading rusher (Ridley) from a season ago, a burgeoning, young, versatile back (Vereen), a grizzled veteran (Washington) and a promising young star in Brandon Bolden, Blount may be short on opportunities. So, he’ll need to make the most of the ones he’s given.

The Patriots may run a new-school offense, but there’s always room for an old-school back on that roster, especially one as talented as Blount. 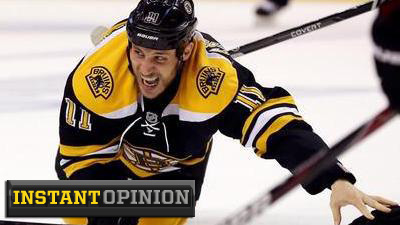 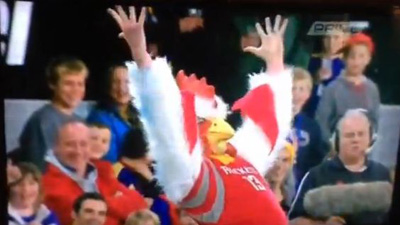