BOSTON — A day before Game 2 of the Stanley Cup Final, the NHL announced that Jonathan Toews was the recipient of the Selke Trophy as the league’s best defensive forward.

After three games of the Cup Final, however, the voters that opted for Toews over Patrice Bergeron — a handful of them from Chicago, no doubt — might be rethinking that decision.

The Bruins took a 2-1 series lead with a 2-0 win over the Blackhawks in Game 3, and Bergeron once again played a key role. The two-way forward, and 2012 Selke winner, had arguably his finest game of the playoffs, helping Boston to its first series lead of the Cup Final.

Bergeron did a little bit of everything in the B’s shutout win, and he once again proved that he’s one of the best players in the NHL, no matter the position.

The Boston alternate captain was named the game’s first star for his performance, a dominant one that propelled the B’s to the potentially series-turning win. Bergeron was simply amazing in all facets of the game. He contributed offensively on the score sheet, scoring a power-play goal that proved to be insurance. Bergeron showed incredible patience in waiting for Corey Crawford to commit before beating the Chicago goalie with the wrist shot.

That was the high point of Bergeron’s special teams showing. He continued to play a key role in the Bruins’ penalty kill — in the middle of 26 straight kills — and his power-play goal was the third of his postseason.

Meanwhile, Bergeron and his line continuously get the toughest defensive matchups for the Bruins at even strength. The confidence that Claude Julien has in that line’s ability to play strong defensively begins with Bergeron. It says a lot that Bergeron’s line now features 41-year-old Jaromir Jagr, a future Hall of Famer with a resume full of offensive accomplishments and not much in the way of defense. Yet Jagr has bought into the system, something that must be made easier by Bergeron’s ability to hide any sort of shortfalls from Jagr in the Boston end.

That line is usually tasked with slowing the best offensive players on the opposition. So it says a lot about the work they’re doing when you consider that the Bruins have held Toews, Patrick Kane, Sidney Crosby and Evgeni Malkin to just one point over the last seven games in the last two series combined.

Where Bergeron was most impressive in Game 3, though, was in the faceoff circle. He won 24 of the 28 faceoffs he took, going 9-for-10 in the offensive zone, 10-for-13 in the neutral zone and a perfect 5-for-5 in the defensive zone. Against Toews, he won eight of 10 draws. Michal Handzus will have nightmares about Bergeron after his 0-for-8 showing against the Boston center.

It was a dominating showing, and it’s a performance that shouldn’t be taken lightly. The importance of winning faceoffs in any zone is obvious. You’re not going to score many goals without possession of the puck, and Bergeron simply gave the Bruins the best chance to be successful with how many times he won them the puck.

But that’s nothing new for him. The Bruins are more than accustomed to this type of performance from No. 37. He’s one of the best all-around players in the league, and hopefully performances like these on the big stage will continue to show that to the rest of the hockey world, especially those who might undervalue him.

Toews may hold the title of Selke Trophy winner for this year, but it’s becoming more and more difficult to argue that Bergeron isn’t the best two-way player in the league right now. Performances like Monday night’s showing only reinforce that. 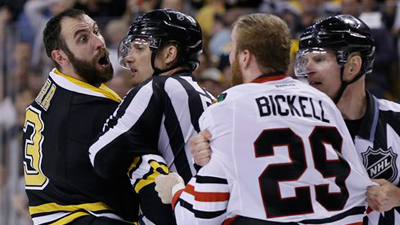