The Patriots’ offseason program came to a close a day early last week, and that sent the players into full vacation mode for the next month or so.

The vacation time doesn’t exactly consist of lounging around on the couch and playing video games all day, at least not for the Patriots. Defensive end Chandler Jones proved that theory with an early-morning tweet about his trip to the gym on Monday.

So, while the Patriots players wind down from a busy few weeks out on the field, we figured it was about time for us to do the same.

Last week, my partner in crime on the NESN.com NFL/Patriots beat, Doug Kyed, sorted out some of the big offensive winners for the Patriots this offseason. Well, I’ve been charged with the defensive side of the ball and have a few interesting names lined up.

The curious case of Ras-I al Ghul — nerdy Batman reference, I know — continues into its third season.  There have been high hopes for Dowling in each of his first two seasons, only to have them dashed by injuries. Now, entering a make-or-break third season, he, yet again, looks like the answer the Patriots have needed on the corner.

Dowling was the corner on the field for nearly all of the offseason workouts, including organized team activities and the two-day minicamp. He stuck on receivers like glue, glided in and out of his breaks like a galloping gazelle and contested enough of Tom Brady‘s passes you might have thought Brady was Mark Sanchez — but not really.

Injuries are still the biggest concern for Dowling heading into this season, but if he can endure a full 16-game schedule, then opposing receivers are in for a real treat between him and Aqib Talib this season.

If Dowling has a chip on his shoulder heading into this season, then what Adrian Wilson is carrying around must be the size of a cinder block. After an up-and-down season in Arizona, Wilson was said to be “washed up” and to have “lost a step.” A bit of advice: don’t tell Adrian that.

First off, Wilson is a physical specimen. He’s 6-foot-3 and 240 pounds of pure muscle and aggression. He more closely resembles a linebacker or tight end than a safety, but he still has — notice the present tense — the speed to cover, and effectively, I might add, out in space.

Wilson was something of a highlight reel during offseason workouts at Gillette Stadium. He helped out consistently over the top of the defense, deflected some passes and intercepted a few more, looking a lot closer to an All-Pro than over-the-hill. He even played some middle linebacker, which could be a solid move for both the Patriots’ defense and his own career longevity.

His contract may not be indicative of a starter, but everything he’s shown so far would indicate otherwise.

Fletcher missed the entire 2012 season with a torn ACL, but he’s already back in the fold at linebacker for the Patriots.

With Brandon Spikes skipping OTAs, Fletcher was given a chance to reclaim the spotlight in the middle, and he did quite well. He moved around well on the surgically repaired knee and seemed to gel nicely with the first-team defense when he got reps there.

It might be a very different story when he slaps the pads on, but he did good work during the offseason practices and the Patriots should feel confident about trotting him out there on passing downs — or anytime, really.

Arrington’s offseason started with a brand new four-year, $16 million contract — that seems like a good start. It continued on with the birth of his son, Kyle Jr. Then, back on the field, he continued to enjoy success.

He started on the outside during OTAs, working opposite Aqib Talib during the first of practices. Since, he’s shifted back to the interior — where he excelled toward the end of last season — and picked up right where he left off with solid play in the slot.

Arrington didn’t have quite the notable success that Dowling and Wilson enjoyed, but he was good and his offseason as a whole seems to be an overwhelming success.

It’s nearly impossible to judge linemen when there’s no contact involved in spring practices, but Wilfork still looked like the supremely talented leader that the Patriots have depended on for a decade now. He’s said all the right things, too — as if that’s a shock to anyone.

Wilfork looked well-conditioned — at least, as well as a 325-pound man can — and seemed as determined as ever when talking about developing a young Patriots defense. Wilfork, now 31, also finally has some dominant pieces alongside him to help make his life a lot easier.

Wilfork will surely be grateful to play alongside some quality talent again, but the combination should also give the Patriots an even more dominant and intimidating presence along the defensive line this season. 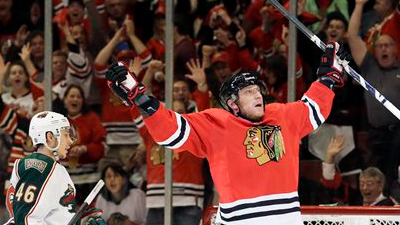