Red Sox Have No Choice But to Make Change After Andrew Bailey Blows Another Save - NESN.com Skip to content John Farrell has no other choice.

Andrew Bailey blew another save against the Tigers on Thursday, and the Red Sox must now make a change to the closer’s role, even if it?s temporary.

Bailey, who has been struggling of late, entered Thursday?s game with a 3-2 lead in the ninth inning. He immediately walked the leadoff man, Victor Martinez, on five pitches, and he then surrendered a two-run, walk-off homer to Jhonny Peralta.

Bailey has now blown three saves in his last five chances, and this one proved to be the most costly. The right-hander blew a save opportunity against the Rays on June 10, but the Red Sox eventually won in 14 innings. He then blew another save chance in the nightcap of Tuesday?s doubleheader, but again, the Red Sox emerged victorious, as Jonny Gomes launched a walk-off home run in the bottom of the ninth inning. This time around, the Red Sox offense never had a chance to overcome Bailey’s mishap.

Farrell said on Wednesday that Bailey was ?definitely our closer,? although he admitted that there was plenty of work to be done. Now, Farrell appears ready to make a move, and it?s something that simply needs to be done.

?Yeah, I think so,? Farrell said when asked if it?s time to consider other ninth-inning options. ?Whether that?s backing [Bailey] out of that to get him some work to get on track a little bit more. What the other internal options are and out of fairness to Andrew and others down there late in the game, we?ll talk more about that internally to make a potential change.?

Bailey said following Thursday?s loss that his mentality hasn?t changed. He said that he still wants to go out and challenge hitters, and he still thinks he?s capable of having success as a big league closer. But Bailey also understands that the results haven?t been there, and he realizes that until they are, Farrell may call someone else?s number at the end of games.

?If he feels that need is necessary then that?s his decision,? Bailey said. ?I gotta go out there and get people out. That?s the bottom line. Whatever situation he wants that in is his call. Like I said last time, I?ve had success in this league. I know how to get people out. I just gotta get back to doing it.?

One thing that?s plagued Bailey during his rough patch is decreased velocity. His fastball hasn?t been the same since he missed time in late April/early May, and while the righty insists that he feels fine physically, the diminished life on his heater has had a trickle-down effect, impacting the effectiveness of his overall repertoire.

?The velocity hasn?t come back to where it was pre-DL stint,” Farrell said. “There?s work being done through long toss program, through the work that he does with the strength and medical staff here. He doesn?t talk of any inflammation or any kind of uncomfortable feeling in the shoulder, and yet the results are what they are.?

The Red Sox have some internal options to replace Bailey. The team could consider going with Junichi Tazawa, Koji Uehara or perhaps even Andrew Miller, who began warming up in the Boston bullpen after Bailey walked Martinez to lead off the ninth inning on Thursday. Regardless of Farrell?s decision, it?s undoubtedly clear that Bailey can?t be trusted in the ninth inning while he works through his issues.

The biggest issue — in addition to his velocity trouble — is putting the ball over the plate. Bailey has walked six batters over his last eight outings (seven innings) after walking four in his first 16 appearances (12 1/3 innings). More importantly, he?s allowed the leadoff man to reach in each of his last five games.

?Any time there?s a save opportunity, it?s the cardinal rule: You can?t let the first guy reach base, let alone the tying run,? Bailey said. ?[I?m] just not being myself out there and I gotta pitch better.?

Bailey is still an important component of the bullpen, so the Red Sox need him to overcome this skid. They just can’t afford to keep playing chicken with the ninth inning. 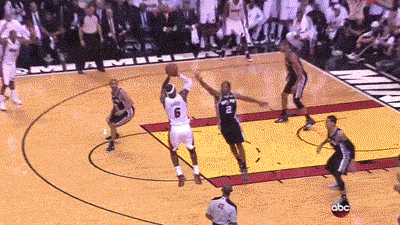 LeBron James, Heat Cap NBA Finals for the Ages With Second Straight Title Nobody Wanted Them to Win