Here’s a bit of a shocker.

The Patriots have signed Tim Tebow, according to Ed Werder of ESPN. Bill Belichick had recently said that he does not hate Tebow’s game. This proves that.

Belichick has a good relationship with Tebow’s old head coach Urban Meyer. Josh McDaniels was head coach of the Broncos in 2010 when Tebow was drafted in the first round.

The Patriots released quarterback Mike Kafka and defensive tackle DeWayne Cherington to make room for Tebow. In case you were living under a rock, Tebow played sparingly for the Jets last season.

Tebow is expected to be at minicamp Tuesday, according to Werder. We’ll see if he’s playing quarterback or another position.

Vote: Will Tebow earn a spot on the Pats’ roster?>> 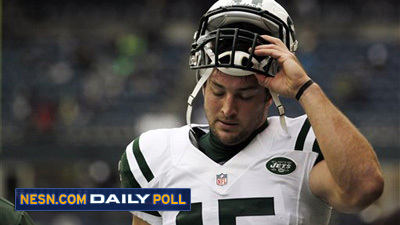 Vote: Will Tim Tebow Earn a Spot on the Patriots’ Roster?