WALTHAM, Mass. — From the outside looking in, the shocking and unexpected announcement made Wednesday that Brad Stevens was bolting Butler University to become the new head coach of the Boston Celtics may have led some to believe that the decision — at least on the Celtics’ end — was made out of the blue and, perhaps, too quickly.

After all, when team president of basketball operations Danny Ainge said he would take his time in selecting Doc Rivers‘ successor after he agreed to let the former Celtics coach out of his contract to be hired by the Los Angeles Clippers, who could have believed that Ainge could make a justifiable hire so seamlessly?

Truth be told, Ainge had his man all along. The decision was one that was a long time — years, even — in the making.

The story begins much earlier than Wednesday’s stunning announcement, earlier than Ainge’s first phone call to the then-Butler coach last week. It was a game plan Ainge had developed ever since a trip to Indianapolis on April 5, 2010, when he traveled with Celtics co-owner Steve Pagliuca to Lucas Oil Stadium to watch the NCAA national championship game between Duke and Butler.

On one end of the court’s sidelines was Stevens, the budding 33-year-old star in the making who led a Bulldogs team full of nobodies to the sport’s biggest stage. On the other end was none other than Mike Krzyzewski, the four-time champion seemingly as big as the sport itself.

“I said to Steve at that time, ‘This is the best coach in college basketball,'” Ainge recalled during Stevens’ introductory news conference Friday at the Celtics’ practice facility.

But he wasn’t talking about Krzyzewski.

“He thought I was talking about Coach K,” Ainge said, “so we had a little debate at that time then and there.”

Stevens’ Bulldogs eventually fell short against Duke, coming a Gordon Hayward near half-court, buzzer-beating shot away from the upset, but it didn’t stop Ainge from keeping an eye on Stevens. The Butler coach went on to reach another national championship in 2011, and Ainge made sure to keep in touch with him, talking hoops and potential draft prospects over the years.

“I always valued what he said, I always valued his input,” Ainge said. “I talk to a lot of coaches, and for some reason, he was always a guy I just trusted.”

So when the deal to send Rivers to L.A. was finalized last Tuesday, Ainge knew exactly who he wanted, and he put the wheels in motion immediately. The first person he called was Stevens. A week later, on Wednesday, Ainge flew with Pagliuca and co-owner Wyc Grousbeck to Indianapolis to meet with him, his wife, Tracy, and their family to try to close the deal.

It wasn’t easy, of course. Stevens had been a coach at Butler, first as an assistant, since he was 24. He’s great friends with the program’s athletic director, Barry Collier, has deep ties to the school and community, and it would naturally take a lot to pry him away to Boston.

So, to be expected, by the time Ainge and company left Stevens’ house, the deal wasn’t done just yet. But Ainge was confident it would be thanks to, of all things, a text message about cleaning toilets.

“When we left the house, they were running a basketball camp at Butler, and his wife had to go leave the meeting early to go fix the toilets,” Ainge said. “I sent her a quick text on our way out that said, ‘You know, you don’t have to do that with the Celtics. We have someone who does that.’

“When we left, we’re walking onto the plane, and Wyc and Pags say to me, you shouldn’t fly back with us. You should stay. They liked this guy so much, and their families so much, all of a sudden they say you’ve got to stay back. You’re not flying back with us. You’re staying here in Indianapolis until that contract is signed because I left a signed contract on their counter. I said, ‘I think we’re OK, guys.'”

Sure enough, they were more than just OK. Stevens would soon after sign on the dotted line, agreeing to join the Celtics on a deal for six years worth a reported $22 million.

“By the time we landed they had signed the contract, faxed it back to us and things were good,” Ainge said.

The rest is history. Stevens flew to Boston — making sure to even read one of Bill Russell‘s books on the way — on Thursday for Friday’s introduction, and the 36-year-old is now the 17th coach in Celtics history, tasked with rebuilding a team in the post-Paul Pierce era and restoring the glory of one of the richest franchises in sports.

And all along, Ainge knew Stevens would be the man for the job. 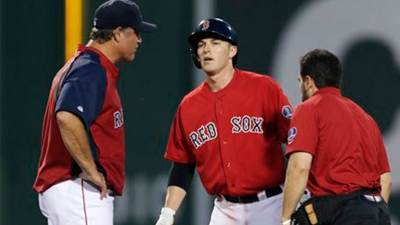