BOSTON — Felix Doubront has ditched the tightrope in favor of stable ground.

There was a point this season when the only consistencies in Doubront?s game were negative. He frequently labored through the early innings while struggling with his command, and the end result was often a high pitch count and a short night, even when the Red Sox managed to survive his woes. Doubront has completely turned his season around, though, and he?s now a pitcher that the Red Sox can rely on for a quality outing every fifth day.

Doubront turned in another good performance in Friday?s second-half opener against the Yankees. He allowed two runs (one earned) on three hits while striking out five and walking three in 6 1/3 innings of work, and, most importantly, he earned a victory as the Red Sox took down the Yankees 4-2.

?As we?ve seen over the last 11 times he?s gone to the mound for us, he?s working six or seven innings each time out,? John Farrell said following Friday?s win. ?Low runs and in probably the last five or six of those starts, he?s come out and gotten into the rhythm of the game much earlier than maybe his first half of the season, or first month and a half of the season. He gave us an opportunity to win. He kept the game in check, just another very solid effort on his part.?

It looked early on this season that Doubront wasn?t going to last in Boston?s rotation. He was a frustrating pitcher to watch, and after six runs allowed in back-to-back outings on May 3 and May 8 ballooned his ERA to 6.40, it was realistic to think that Allen Webster or someone else would soon leapfrog Doubront on the Red Sox? depth chart.

The Red Sox stuck with Doubront, though, and the left-hander has been nothing short of fantastic recently. He?s pitching with a great deal of confidence, and the only consistencies in his game have suddenly become positive ones.

?I think it?s as much repetition and innings under his belt,? Farrell said. ?He certainly gained a lot of confidence over his last couple of months. He?s trusting his fastball a lot more on the plate and not trying to be so fine, and he?s got a four-pitch mix working that he?s used right out of the gate in games to not only establish a fastball but also use his other stuff to allow him some breathing room inside the strike zone. He doesn?t have to be so pinpoint by just trying to establish his fastball solely.?

Doubront?s 12 straight starts of allowing three earned runs or less is the longest such stretch in a single season by a Red Sox lefty since 1920 — Bill Lee also accomplished the feat in 1973. Even more amazing is that Doubront is the first Red Sox pitcher overall with such a single-season streak since Pedro Martinez allowed three runs or fewer in 14 straight starts in 2002.

Now, no one is going to say Doubront is suddenly Bill Lee or Pedro Martinez, but it?s time we start recognizing just how important the southpaw has been to the Red Sox this season. His turnaround couldn?t have come at a better time for the Red Sox, as it has helped them not only survive Clay Buchholz?s injury and Jon Lester?s inconsistency but also thrive amid those two potentially crippling issues.

Getting Buchholz healthy and Lester firmly on track are still two of the Red Sox? biggest issues as the second half gets underway. Without a productive Doubront, John Lackey and Ryan Dempster, however, those two issues would be magnified even more than they already are.

Doubront might never evolve into a front-end starter. But he keeps reminding the Red Sox that they have a very good southpaw who is coming into his own during his age-25 season. 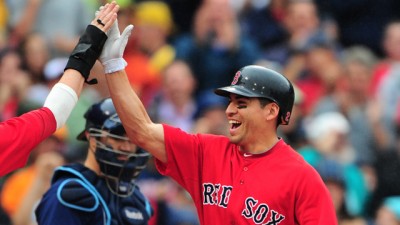