BOSTON — Jacoby Ellsbury probably isn?t going to replicate his 2011 home run total any time soon. But the power surge he enjoyed that season might not be a total mirage, either.

Ellsbury launched a leadoff home run over the bullpens in right field Friday to kick off what was eventually a 4-2 Red Sox win. It was just his fourth home run of the season, but three have come this month, and Ellsbury looks poised for a second-half uptick in the power department.

Ellsbury, who has been producing at an All-Star level, upped his average to .308 with a 2-for-3 effort Friday, which is amazing considering he was hitting .241 and in jeopardy of being dropped down in the order on May 20. But while Ellsbury has been one of the Red Sox? most consistent and productive players for the last two months, we?re just now seeing the power stroke rear its head.

?He?s been in such a good place from a balance standpoint and his timing has been much more consistent,? manager John Farrell said following Friday?s win. ?Going back to earlier in the year when we came out of that trip through Chicago. From that point forward, his timing has been much more Jacoby-like and again his ability to get on base stands for itself with the havoc he can create. We?re just seeing a little bit better leverage in the swing overall.?

Before the season, it was tough to figure out which Ellsbury was the real deal. Was he the guy who posted an OPS of .928 while driving in 105 runs, or was he the lighter-hitting leadoff man whose second-highest single-season home run total was nine? The question still lingers after 98 games, but the answer likely lies somewhere in the middle. Ellsbury might not slug 32 home runs year in and year out, but it?s obvious that he has more power than he demonstrated for much of the first half.

Ellsbury?s early-season lack of power wasn?t all that concerning, really. He leads the majors with 117 hits from the leadoff spot, and he is baseball?s most prolific base stealer this season. A little pop never hurt anyone, though, and we might be in for more than an occasional dose in the second half. 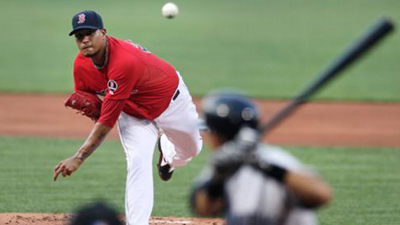