After a 7-1 loss, the Pella Dutch high school baseball team stopped at Burger King for some pick-me-up ice cream. It wasn’t the soft serve in Fairfield, Iowa, that cheered up the team, though.

Actor Jim Carrey happened to be at the same fast food restaurant at the same time and started talking to some of the players, according to the Des Moines Register. Pella coach Jesse Jablonski didn’t want his team to bother the Dumb & Dumber star, so he led the players back to their bus. Carrey followed the team out, though, and insisted to take a picture.

One of the players posted the photo to imgur with the caption “My high school’s baseball team lost, then ran into this guy at BK. Right before the picture he yelled, ‘WHO ARE THE [expletive] WINNERS NOW?!'”

Carrey held up seven fingers (for the opposing team’s score) with one of the Pella players holding up a one. The Des Moines Register surmises that Carrey was in Iowa for the Maharishi University of Management or the Ayurveda health spa, The Raj.

Ice cream alone couldn’t have produced the wide smiles found in the photo below. That’s one way to celebrate. A weird way, but a way, nonetheless. Ian Rapoport might be having some fun with TV viewers on the NFL Network.

Brad Miller hit an absolute bomb for his first major league home run. He hit No. 2 in the same game. 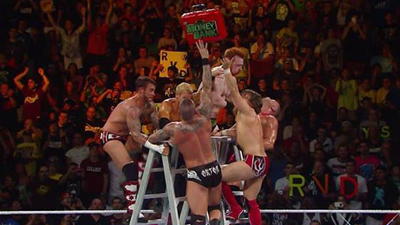