Jozy Altidore liked the few sips he took from the golden chalice that is Premier League soccer in 2009-10. He returns to the adults’ table, having signed with Sunderland on Tuesday, ready to grab the cup and drink the whole thing.

Altidore joins Sunderland from AZ Alkmaar after two successful seasons at the Dutch club. He was a regular starter there, playing 93 games in all competitions. His fitness, sharpness, positioning and awareness levels grew in the Dutch game, and his impressive goal-scoring tally, 51, is a mere byproduct of his overall improvement as a player.

While his AZ output is a fair reflection of his ability and potential, it was the strides he has taken — both as a man and as a professional — that convinced Sunderland to spend £6 million ($9 million) on him. Altidore must lean on that maturity as he looks to earn the trust of new manager Paolo Di Canio and establish himself in the Premier League at this pivotal point in his career.

Making the jump from the Dutch Eredivisie (first division) to the Premier League will challenge Altidore. The English game is faster, more physical and more closely scrutinized than its Dutch counterpart. But facing a higher level of competition won’t be the driving force behind his progress at Sunderland. The real push will come from Di Canio, who is seen as one of the most demanding, if not tyrannical, managers in the English game.

Di Canio took charge in April and steered Sunderland clear of relegation. Once Premier League soccer was confirmed for another season, Di Canio set about remaking the squad in his own image. Players who failed to meet his high standards were released, and new faces, vetted by Di Canio’s trusted scouts and lieutenants, arrived. Five signings preceded Altidore, and more are likely to come. But Altidore could be seen as the marquee name in Di Canio’s Sunderland revolution when the dust settles and the games begin.

Di Canio will almost certainly give Altidore a chance to become Sunderland’s first-choice striker from the outset. Steven Fletcher was last season’s top scorer with 11 league goals. Danny Graham, Connor Wickham and Ji Dong-Won contributed a grand total of zero. If Altidore stays in Di Canio’s good graces — and that will only be possible through maniacal dedication — he will play a lot of games, stay sharp and be in a good position to make the most of his second chance in the Premier League.

Altidore has been around for so long, it’s easy to forget that he is just 23 years old. He turned professional in 2006 with Major League Soccer’s New York Red Bulls, and his performances in MLS and in youth international tournaments prompted Spanish club Villarreal to pay £7 million ($10.4 milion) for the then 18-year-old in 2008.

Altidore quickly learned the harsh realities of European soccer. A journeyman start to his European adventure has seen him play in five countries. Manuel Pellegrini, the manager who signed him at Villarreal, used him sparingly before loaning him to Xerez (in Spain’s second division). Pellegrini left for Real Madrid after the 2008-09 season, and the men who replaced him — first Ernesto Valverde then Juan Carlos Garrido — had little use for the American prospect. Villarreal loaned him to England’s Hull City for the 2009-10 campaign. He was a squad player with the relegation-bound Tigers, making little impact in his first stint in England. He returned Spain for the start of the next season, but Villarreal loaned him out again — this time to Bursaspor in Turkey.

His form and confidence, both for club and country, suffered during this nomadic period, and some took to calling him “washed up” before his 21st birthday. While, it’s hard to pinpoint why Altidore didn’t stick in Spain, England or Turkey, it’s safe to say that he was unable (or unwilling) to fight his way into prominence.

Joining AZ in 2011 breathed new life into his career, but it almost didn’t turn out that way. AZ manager Gertjan Verbeek, is another strict disciplinarian, and it took a few months for Altidore to win him over. Once he satisfied Verbeek by demonstrating a genuine commitment to his craft, he began to blossom. He scored 20 goals (in 52 games) in his first season with AZ and followed it with 31 (in 41) in 2012-13 — a record for an American in Europe.

In September, Altidore told Soccer By Ives that his early struggles were a valuable part of his development.

But Altidore’s trials weren’t completely behind him. A month after speaking to SBI, he was dropped from the U.S. national team by head coach Jurgen Klinsmann for a pair of FIFA World Cup qualifiers. Klinsmann was sending Altidore a message, saying his attitude and performances were not good enough. Yet, Altidore kept working (and scoring) at AZ and returned to the national team a month later. Klinsmann’s approach had the desired effect, as Altidore gradually worked his way back into the U.S. rotation. In June, the resurgent striker emphatically ended an 18-month international goal drought by scoring in four straight games, leading the U.S. to the top of the CONCACAF hexagonal standings.

Verbeek and Klinsmann were hard on Altidore, but their version of tough love will probably pale in comparison to Di Canio’s. Some describe the Italian’s management style as “authoritarian.” Others prefer “totalitarian,” as he demands that his players show total commitment, discipline, attention to detail and passion for the game in their professional and personal lives. Verbeek and Klinsmann have had positive effects on Altidore’s career. Di Canio’s methods could take Altidore to the next level, as his story suggests that he thrives under these types of managers.

Spending two or three years under Di Canio’s watchful eye will see Altidore enter his prime years as a model professional. If he seizes his chance and keeps scoring at an impressive clip, it will only be a matter of time before a bigger club tries to poach him from Sunderland. When he takes his next step, he will have enough professional seasoning to assume a leadership role (and withstand scrutiny) wherever he goes. Who knows? It could be newly installed Manchester City manager Pellegrini who comes knocking and offers Altidore a seat at his table. He has already done it once before. 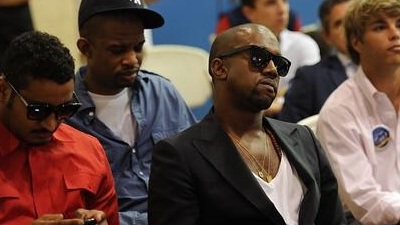 Kanye West Attended ‘The Decision,’ But Fell Asleep Before LeBron James Made Announcement