FOXBORO, Mass. — With Aaron Hernandez spending his time in solitary confinement, the Patriots may need to get creative to keep defenses on their toes.

One wrinkle New England has shown during the first few days of training camp is splitting Shane Vereen, Stevan Ridley, Brandon Bolden and Leon Washington out wide or in the slot at receiver. Ridley has been getting snaps outside, Vereen and Washington in the slot and Bolden in a role Hernandez held before, starting out wide and coming back to the backfield in motion.

Vereen and Danny Woodhead took reps at wide receiver last season, with the most notable snap coming in the divisional playoff game against the Texans, when Vereen took his option route deep for a 33-yard touchdown over Barrett Ruud.

The running backs seem prepared to take on a more versatile role this season, though Vereen says he’s only doing what’s expected of him.

“That’s what they ask of you as a running back,” Vereen said. “And that’s what it’s been like since Day 1. I wouldn’t expect it to be anything different. That’s your job. That’s what you expect, so that’s what you have to learn.”

Ridley expressed interest in being an all-around running back Friday. The third-year back only has 26 receptions in his two seasons in New England and three at LSU combined.

?This is a balanced offense. We get it done through the air and the ground as well,? Ridley said. ?If they come to the running backs a little bit more, we?re gonna be that excited to catch a few balls out of the air. I can?t really say they?re going to put more emphasis on it because there?s always emphasis on it out here. The coaching staff that we have ? they don?t cut any slack. They want us catching the ball, they want us blocking, they want us running. They want us in all three phases. Not just one.?

While it’s fair to say the running backs have always been a part of the passing offense, it will be interesting to see how often they split out wide during the season. Belichick has mentioned taking a best-11-players approach before. That could mean having one running back in the backfield and another at wide receiver. Defenses would then have to decide if they were going to predict run and go base or pass and go nickel or dime.

“It’s just an offense where you’re asked to do a lot,” Vereen said. “And there’s nothing wrong with that. You’ve just got to work hard on your personal game to fulfill the requirements.”

Vereen is expected to have a big season with Hernandez gone and Rob Gronkowski likely to miss some time to start the season. The Patriots won’t just fill Hernandez’s role with the next best tight end on the roster. If they have to adjust the playbook to fit in the new pieces, they will.

But don’t worry, just because Vereen is taking snaps at wide receiver, he’s not going to start acting like a prima donna. Vereen said, “No chance,” when asked if he’s going to pull a Sharpie out of his shoe after a touchdown. 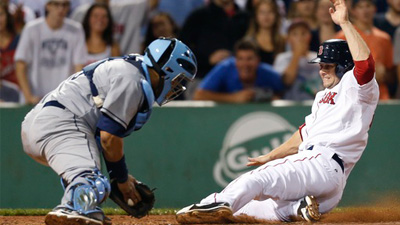 Jerry Meals Admits to Blowing Call at Home Plate, Says Daniel Nava Should Have Been Safe

Danny Amendola Did MMA Fighting With Randy Couture, Chuck Liddell During Offseason to Prepare for 2013 Season