Stevan Ridley Ready to 'Do It All' to Help Patriots Offense, 'Not Satisfied' With Breakout 2012 Campaign - NESN.com Skip to content FOXBORO, Mass. — By now, it’s really no secret how much of a challenge the Patriots’ offense faces heading into this season.

With New England’s top five receivers from last season now gone, it’s up to just about everybody to step up and replenish the production that made the Patriots the highest-scoring offense in the NFL last season. But while much has been made — and rightly so — about how the team’s young cast of receivers will need to grow up quickly, it should be mentioned that the Patriots’ rushing game could also help ease the load on Tom Brady and the passing attack.

It starts with Stevan Ridley, who broke out last season in his second year as a pro, racking up 1,263 yards and 12 touchdowns. Much of the same is expected out of the speedy back this season, and if he can at least sniff those numbers again, it would come as a welcome sign for the offense.

But it doesn’t stop at Ridley, either. Perhaps lost in the shuffle is that the Patriots actually have two former 1,000-yard running backs on their roster after the offseason acquisition of LeGarrette Blount, who ran for 1,007 yards in his first of three seasons with Tampa Bay.  Add in the versatile Shane Vereen and the powerful Brandon Bolden, and suddenly you have one of the deepest running back groups in the league.

And according to Ridley, while they may be a young bunch — those four backs have a combined eight seasons’ worth of experience — the group has all the tools needed to excel.

“It’s a bunch of different-style runners, but I think we have pretty much every runner that we need,” Ridley said after Tuesday’s practice. “We got receivers out of the backfield, we have power runners, we have slashers and we have all-around fullbacks that are coming in and making an impression. We’re going to work as one unit, we’re going to get it done however we need to get it done on the ground.”

One of those things that may need to be done is helping out in the passing game when needed. It shouldn’t come as a surprise that the Patriots operate under a pass-happy scheme with Brady at the helm of the offense, so when you consider the inexperience and lack of familiarity the quarterback has with the receivers and tight ends now on the roster, it doesn’t seem out of the realm of possibility that Brady could steer toward his backs for support.

Last season, Ridley, Vereen and Bolden combined for only 16 receptions and 29 targets. Factor in that Blount isn’t the biggest of pass catchers, either (one reception last season), and there will certainly be a learning curve. No one is expecting the running backs to put together the kind of numbers that Wes Welker did a year ago, but an increase in production this season almost seems like a formality rather than a question.

Ridley, at least, is up for that kind of challenge.

“I’m trying to do whatever the coaches ask me to do,” he said. “If I need to line up in the backfield or line up at receiver, I’m going to do it all.”

Of course, the actual running game will be just as important — perhaps more so this year than ever.

A consistent ground attack could mean the difference with this Patriots’ offense. It could keep defenses honest, help spread the field for Brady to operate with his new receivers and keep defenses from overloading the box and pressuring the quarterback — the latter of which was one of the reasons the team fell short in last year’s AFC Championship Game against the Ravens.

There are certainly many questions surrounding the offense, but motivation doesn’t seem to be one of them. Seasons like Ridley had in 2012 may give some players an exaggerated sense of entitlement, but it doesn’t appear anyone has to worry about the third-year back attaining that kind of label.

“You gotta come in and better yourself,” Ridley said. “I’m not satisfied. I just gotta keep working, so that’s my expectation is to keep moving and keep climbing that ladder in the coaches’ mind.”

And if he, as well as the rest of these balanced group of running backs, can do that, they could also realistically be climbing the ladder to a Super Bowl. 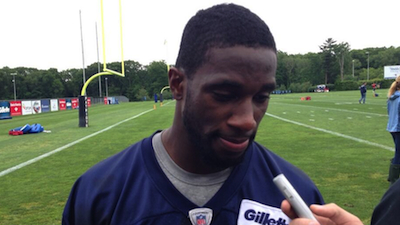