FOXBORO, Mass. — Brandon Bolden didn’t get much run during the Patriots’ preseason opener on Friday night, but, with the way he’s looked in practice of late, that could change quickly.

Bolden carried the ball just four times for 14 yards and caught one pass for 17 yards on Friday, which didn’t even hold a candle to the 11 carries, 101 yards and two touchdowns that LeGarrette Blount — his primary competition to make the 53-man roster — blazed for against the Eagles’ defense. But Bolden continues to prove why the competition isn’t as cut and dry as Blount has made it seem thus far.

Bolden, 23, was a solid contributor out of the Patriots’ backfield at times in 2012 and was expected to take on an even bigger role this season, but an apparent ankle sprain kept him out of spring practices and even a few days at the start of training camp. The second-year back finally looks like he’s back to 100 percent health and even seems to have an added pep in his step.

The Patriots were back on the practice field at Gillette Stadium on Monday, running a team walkthrough before the Buccaneers visit Foxboro for three days of joint practices starting Tuesday. Bolden was one of the few players who really stood out during the session, showing the type of quick bursts and footwork off the line that we haven’t seen since late last season.

Bolden took reps with both the first and second teams on Monday, consistently exploding out of the backfield and through holes along the offensive line. Running through defenses in pad-less, no contact drills should be taken with the appropriate amount of salt, but the speed that Bolden showed during the practice is exactly what the Patriots coveted about him when he made the team as an undrafted rookie last year. Well, that and his size.

Bolden is quicker than Blount, which is an obvious advantage, but he also measures up perfectly along with starting running back Stevan Ridley — both listed at 5-foot-11 and 220 pounds. Ridley is an integral part of the success of this offense and to have a clone waiting to spell or replace him, if necessary, at a moments notice makes Bolden a convenient perk for the Patriots.

Monday was a nice return to the explosive Bolden we saw at times in 2012, but seeing him exhibit the same sort of burst against live, padded competition will be a much better test, and we’ll get an extended look as he goes up against the Bucs over the next few days. That explosion and speed is a special asset for him, though, and could make the difference between he and Blount come decision time.

Then again, if Blount continues to play like he did on Friday then all bets are off.

1. Zach Sudfeld — He continues to run precise and crisp routes over the middle. Plus, Brady just keeps looking his way, and that has to be a good sign.

2. Stephen Gostkowski — He hit a 50-plus yard field goal during a hurry-up two-minute 11-on-11 session. He seemed very accurate on the whole, which is a big note after missing a pair of field goals against the Eagles.

3. Danny Amendola — He continues to show great chemistry with Tom Brady and displayed excellent concentration on a few passes during 7-on-7s, even snatching one from behind his head with one hand.

1. Tavon Wilson — He was beat a few times over the top in the secondary, including one touchdown from Brady to Daniel Fells.

2. Ryan Mallett — He was back at practice after leaving Friday’s game with a “head injury,” which is a good sign, but he continues to struggle with accuracy.

3. LeGarrette Blount — After his big Friday night, Blount dropped a pair of passes from Brady. Catching the ball out of the backfield continues to be a glaring issue for him. 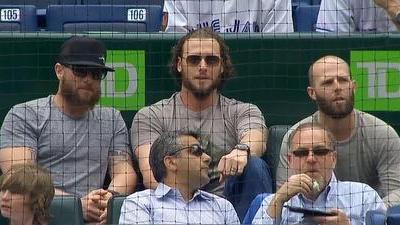